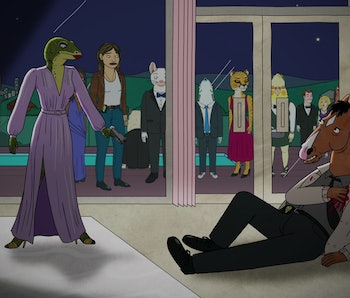 If everything going on around the world hasn’t yet killed off your hope and optimism, allow the Netflix series BoJack Horseman to finish the job. The fifth season of the acclaimed animated drama (that, yeah, has some comedy in it) has been announced, with a premiere date set for September 14. To top it off, the first-look image released by Netflix teases an even worse year for the washed-up sitcom stallion.

On Wednesday, the Twitter account for BoJack Horseman hastily responded to a fan begging for news on Season 5. “wooowwww congratulations you are the 10000000 person to ask that question,” wrote “BoJack” to the fan, “your prize is the answer sept 14th now please stop asking me.”

Shortly afterwards, Netflix released the first-look image of BoJack Horseman Season 5 and, woof, it’s a tough one. Or maybe it’s not. It is Hollywoo, after all.

As revealed in the image, BoJack has been shot in the gut in what looks like his living room, with a dapper crowd staring blankly outside.

BoJack, meanwhile, is dressed like a police detective, which can either mean 1) BoJack has retired from acting to become a cop, which is unlikely, or 2) it’s a set photo from Princess Carolyn’s series Philbert, and BoJack is playing the lead. Either way, the dark tone of the image shows BoJack Horseman is far from done tearing our hearts out.

In BoJack Horseman, Will Arnett provides the voice of the show’s titular character, who found fame in the ‘90s as the star of a network sitcom Horsin’ Around. But with stardom behind him, BoJack struggles to make his comeback just as much as he struggles to connect with others outside the confines of a television audience.

In recent seasons, BoJack has made strides in his career comeback, but he’s also been forced to confront the ghosts of his past. This includes permanently closing the door on a beloved ex (now living with her family in Arizona) and, last season, where he connected with his estranged sister.