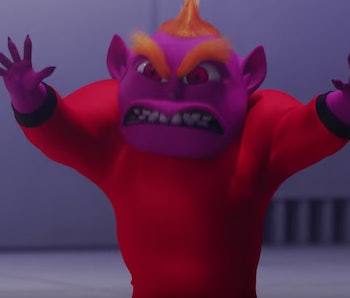 A lot can change in 14 years. When the The Incredibles hit theaters back in 2004, superhero movies were barely a thing, George Lucas was still pumping out terrible Star Wars prequels, and nobody knew what a “toxic fandom” was. Fast-forward to 2018 and superheroes are dominating the box office, Disney is pumping out pretty decent Star Wars movies, and toxic fans are doing their best to ruin the internet for anyone who tries to change their favorite fictional characters.

The original Incredibles had the foresight to predict two of those changes (I’m pretty sure there’s nothing about Disney buying Star Wars in any of Pixar’s movie). Now, almost a decade and a half later, it’s back to capitalize on the superhero explosion it helped ignite, but the franchise that originally identified the dangers of obsessive fandom has surprisingly little to say about the issue at a time when it’s more prevalent than ever.

Instead, Incredibles 2 sidesteps the problem entirely, siding with those overzealous — and sometimes racist or misogynistic — fans in the process.

What is toxic fandom?

Pulling in legions of devoted fans who watch every movie, obsess over every leak, and argue about their favorite theories in online forums may sound like a huge plus, but in the last few years we’ve seen another side of these fandoms rear its ugly head. A small but extremely vocal group of people often feel like they have ownership of a long-running franchise (whether that’s Star Wars or Ghostbusters) and as soon as it starts to change the pitchforks come out.

Often, the issue boils down to adding diversity to a world that was primarily white and male. Under Disney’s ownership, Star Wars has made a clear effort to do just that, and the response has been unsettling to say the least. Earlier this month, asian actress Kelly Marie Tran (who starred in Star Wars: The Last Jedi) deleted her Instagram account after suffering through months of harassment.

Leslie Jones faced a similar backlash after the all-female Ghostbusters remake hit theaters, and more recently Stranger Things star Millie Brown quit Twitter after a series of homophobic tweets. Nintendo “fans” have even taken to sending photoshopped images of the 9/11 terrorist attack to Super Smash Bros. Ultimate director Masahiro Sakurai because he failed to include their favorite character in the new game.

Toxic Fandom didn’t come out of nowhere. People have obsessed over their favorite movies and video games for decades, but the combination of internet troll culture and the rise of a populist political right wing gave these fans the platform they needed to run amok online.

It might feel like the entire movement bubbled up in just a few short years (the term didn’t really take off until 2016). But it’s been simmering quietly for over a decade, and The Incredibles saw it coming.

If you haven’t watched The Incredibles in a while, here’s a quick recap. The film opens in an alternate 1947 where superheroes are real and publicly accepted. Our hero, Mr. Incredibles, encounters an obsessed fan named Buddy who’s determined to become a bonafide sidekick. But when things go wrong, Mr. Incredible blows Buddy off.

15 years later (in the movie), superheroes are illegal, while Mr. Incredible is married with kids and working a soul crushing office job. Then he gets a call from a mysterious benefactor who hires him to fight off a killer robot. Long story short, it turns out the mystery man is Buddy (now going by the supervillain name Syndrome) and he’s spent the last decade killing off every superhero he can find. All because Mr. Incredible didn’t live up to his childish expectations.

Screen Junkies makes a similar point in a recent installment of their Honest Trailers series, slipping a bit of insight in between jokes about rocket boots and superheroes getting sucked into airplane turbines.

“Syndrome [is] a perfect prediction of today’s entitled fan culture,” the narrator says. “He’s a nerd who loves something so much that when it didn’t live up to his expectations, he declared war on it.”

That’s a pretty perfect summary of toxic fan culture as it currently exists, but Honest Trailers doesn’t take the time to actually unpack what it means today, and neither does Incredibles 2. The long-anticipated sequel had a clear opportunity to move the conversation forward at a time when toxic fandoms are more prevalent than ever. Instead, it glosses over the issue entirely.

Warning: We’re about to get into spoilers territory for Incredibles 2.

Incredibles 2 takes the opposite approach, siding with those very same fans in the form of Bob Odenkirk’s character, Winston Deavor, a tech billionaire and mega-fan who sets out to restore superheroes to their original glory. Deavor feels nostalgic for the golden age of heroes. He also blames the death of his parents on the government’s decision to ban them.

When we first meet Deavor he seems like the obvious villain. After all, he’s a mysterious billionaire with a too-good-to-be-true proposal (just like Syndrome in the original movie). Instead, Incredibles 2 subverts your expectations by having the sketchy superhero-obsessed benefactor actually turn out to be an actual good guy. It’s a clever twist, but one that reinforces the idea that only true fans know what’s best for their heroes.

The movie doubles down on that idea by turning Winston’s sister, who’s always blamed superheroes for the death of their parents, into the actual villain. She’s never been a fan, which makes it that much easier for her to turn on our heroes. The message of Incredibles 2 is clear: fans are good and pure, anyone who doubts or criticizes is evil.

In an alternate universe, Incredibles 2 reckons with the issues Syndrome so perfectly encapsulated. Perhaps, Bob Odenkirk’s character could have carried that torch as an overbearing fan with a legion of trollish followers behind him, forcing the Incredibles family to confront their own toxic fandom head on.

Incredibles 2 could have been that movie, a stunning indictment of toxic fan culture arriving just in time to set the record straight. Instead, Pixar and director Brad Bird missed out on the opportunity right when it mattered most. Now, the best we can hope for is a better message in Incredibles 3, though based on the last two releases this next one probably won’t arrive until it’s far too late.