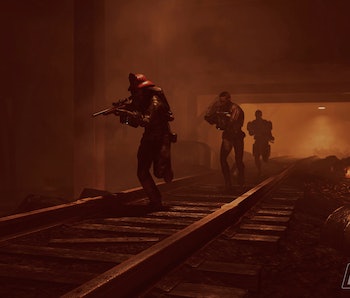 Everyone who pre-orders Fallout 76 will gain access to the game’s open beta, but if you’re one of the lucky players with an Xbox One, you’ll be heading out to the wastes of West Virginia sooner than everyone else.

When Bethesda unveiled Fallout 76 at E3 2018, it discussed how the B.E.T.A. (Break It Early Test Application — cute) will be available to anyone who preorders, but it never mentioned anything about timed exclusivity. A recent update to the game’s FAQ confirmed that Xbox players will get first dibs. PlayStation 4 and PC players will get access at a later time.

There are no further details on when each platform will receive their respective beta passes. The studio said it will update fans via social media.

This doesn’t come as a total shock. After all, the Fallout 76 was presented at part of Microsoft’s E3 2018 conference and the trailer on Bethesda’s official YouTube channel opens with the Xbox logo. Discussions were had and money clearly exchanged hands. Still, it’s a bummer to PS4 and PC players who are eager to start exploring.

Perhaps this is a blessing in disguise. At first, I was quite intrigued with the possibility of a survival shooter set in the Fallout universe. It’s a spin-off game, so why not? Go wild. The Noclip documentary on Bethesda gave off the impression that Fallout 76 is an ambitious game with risky, exciting design decisions like the ability to nuke other players’ settlements and the need to scavage basic supplies to stay alive like food and water.

But the new information coming out now suggests the opposite. Fallout 76 is supposed to be a “soft survival” game. It’s designed so you can easily avoid combat, and even if you get killed by another player you won’t lose any of your gear or your experience. The entire point of PvP in a survival game is the ubiquitous fear of being ambushed at any moment and the tension of losing what you have gained.

Though Fallout 76 brands itself as a bold tangent to the main series, it doesn’t look very different. In fact, it just looks like more of the same, except this time there are no NPCs and apparently no real villain or threat to conquer.

Buyer beware. Let the Xbox One vault dwellers venture out first and see if West Virginia is worth rebuilding.