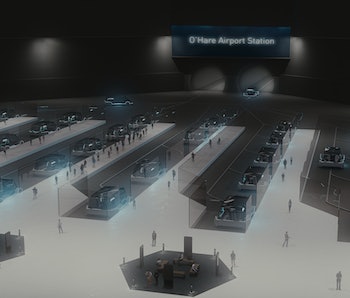 E lon Musk made big news Wednesday when it was announced that his Boring Company found a city to build an underground transport system. Then on Thursday, the company posted a video giving an idea of how this underground loop will work.

The Boring Company tweeted a video Thursday showing a Tesla Model X speeding through a tunnel as an early example of what the company intends to do with the Chicago Express Loop, also known as The X. The car acts in the same fashion as what the company calls an electric skate, which will be used to transport individuals from Block 37 in downtown Chicago and O’Hare Airport.

In the video, the Model 3 is guided by metal discs placed between the rails of the tunnel. The expectation is that instead of a car, electric skates will carry between up to 16 passengers travelers from one location to another at speeds between 125-150 miles per hour all on battery power. A 16-mile trip would take 12 minutes making it three to four times faster than other forms of travel for the same amount of distance.

Musk originally proposed the idea of a high-speed loop for Chicago last November. Unlike the Hyperloop that creates a vacuum tunnel to reach speed up to 700 miles per hour, the Chicago Express loop will be a standard tunnel since it’s such a short distance.

Ride on The X will cost between $20 and $25, on par with a taxi ride from the airport. Construction will cost less than $1 billion and will be privately funded by The Boring Company. Specifics about the project will be hashed out in contract negotiation between the company and the city sometime in the future.

Back in May, Musk showed off the first proof-of-concept tunnel in Los Angeles. He said people will be able to ride for free in a few months and when finished, the L.A. loop will cost $1 a ride.