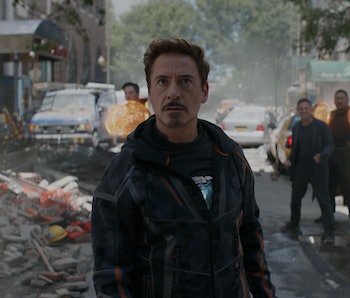 The future of the Marvel Cinematic Universe, it would seem, is female.

On Wednesday at CineEurope, Disney treated fans to previews for the likes of Toy Story 4 and Wreck-It Ralph 2, but the media juggernaut also debuted some exclusive new footage from Ant-Man and the Wasp, Captain Marvel, and yes, Avengers 4.

The featurette that debuted for Captain Marvel supposedly debuted the first-ever official footage of Brie Larson’s Carol Danvers, and someone supposedly said, “Captain Marvel is about to take the lead in the entire Marvel Cinematic Universe.”

The current state of the MCU as we know it has revolved around Robert Downey, Jr.’s Iron Man, and when Avengers 4 finally releases, it’ll mark the beginning of a new era with new heroes. It’s fitting that part of this new direction includes Ant-Man and the Wasp, in which Ant-Man teams up with a women with more combat skills and abilities than him as they both fight an overwhelmingly powerful new female enemy named Ghost. And all before Captain Marvel, the most powerful person in the universe, hits the scene to become the new focus.

In a male-dominated superhero universe, this is a total change of pace.

It’s unclear at this time exactly what was shown for each of these upcoming Marvel movies. We don’t even know for sure that what was shown of Avengers 4 was confirmed concept art or video. But according to MovieWeb, Kevin Feige introduced Avengers 4 “footage” by saying, “We’re going to see our characters make an effort to become a real team with each other.”

ComicBook.com claimed that attendees had to “lock their phones away,” so it’s unlikely we’ll get any sneakily recorded bits of footage. So don’t expect this one to be like the Infinity War trailer that played during D23 and then leaked online fairly quickly.