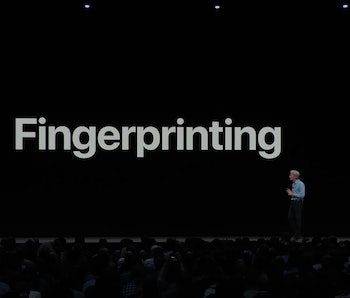 When the new macOS, called Mojave, made its debut at Apple’s Worldwide Developers Conference last Monday, many Mac users loved the security changes it will have, but not the fact that some of those changes require them to switch their browser to Safari. That change to Safari, however, is a key part of making everyone more secure.

A thread on the Apple subreddit broke down what Apple is attempting to do with the security changes with Safari. In particular, a Reddit user noticed the striking similarities to what Apple wants to accomplish with the browser changes with how Tor works. Simply put, the more Mac users who use Safari, the more secure everyone will be because there is a bigger crowd of browsers that can appear to be the same to data companies.

Apple’s strategy with Safari is to reduce the ways users can be tracked. Specifically, a method known as “fingerprinting” tracks a user based on their browsers configuration, plug-ins, and even fonts. With Mojave and Safari, Mac users will look more like each other using built-in fonts, simple configurations, and getting rid of legacy plug-ins.

This strategy is similar to how Tor works in order to protect a user’s privacy. By using a Tor browser, data is withheld so that it’s not easily noticeable by traffic analysis or internet surveillance. While Tor does do far more to make a person anonymous online, the browser is part of the process to keep all users appearing the same to anyone tracking data online. For both Safari and Tor, the more people that use the browser, the safer everyone is because there are more users that appear the same to data companies.

Mojave and the new Safari browser will release sometime in Fall 2018. Those savvy Mac users who want to try the browser early can visit the developer page to download an early build of Mojave.

At WWDC, Apple showed off their plans for both iOS 12 and Mojave, and some companies are going to be in big trouble when both operating systems come out.

More like this
Gear
Jan. 18, 2023
Google could make the AirTag alternative we really want
By Jackson Chen
Innovation
Jan. 12, 2023
Government-issued digital currencies could bring about a dystopian future, security experts warn
By Molly Glick and Rahul Rao
Innovation
Jan. 21, 2023
45 genius solutions to your stupid problems around the house
By Christina X. Wood
LEARN SOMETHING NEW EVERY DAY.
Related Tags
Share: