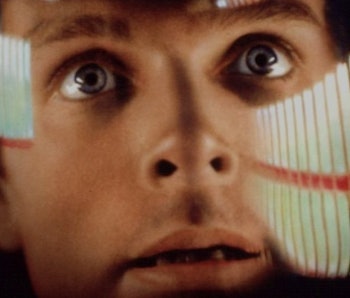 Elon Musk has big ideas for his Mars-bound missions. The SpaceX CEO shared his tongue-in-cheek musings on Friday of how the company’s vehicles could take inspiration from Stanley Kubrick’s intergalactic epic 2001: A Space Odyssey — complete with protection against runaway artificial intelligence.

Musk shared an animation of how he pictures the running track inside the BFR, the Mars-bound spaceship set to ferry humans to the red planet by 2024. The GIF shows an iconic clip from the film, with Frank Poole (played by Gary Lockwood) keeping fit on board the spaceship Discovery by going for a jog around the cylindrical vessel. Musk told attendees at the International Astronautical Congress in Adelaide, Australia, that the Mars mission would take around three to six months, with around three people in each of the 40 cabins. With such a long trip ahead, maybe a Kubrick-style running machine may not be a bad call.

Musk also wrote that he would include a pod bay door override button, stating simply “lesson learned.” HAL 9000, the onboard computer that wreaks havoc with the team’s mission, has become a near-legendary symbol of the perils of runaway artificial intelligence. Musk has spoken before about the need for A.I. regulation “like we do food, drugs, aircraft & cars,” calling on legislators to take action by sharing links to Warren G and Snoop Dogg song “Regulate.”

Musk has linked his SpaceX work to science fiction before. His two drone-ships Of Course I Still Love You and Just Read the Instructions are named after the late Iain M. Banks’ Culture series of novels, which focus on a symbiotic society between humans and machines — a similar theme to the ideas behind Musk’s other startup Neuralink. Musk also announced in 2016 plans to name the first Mars-bound spacecraft Heart of Gold after the ship in Douglas Adams’ The Hitchhiker’s Guide to the Galaxy.

Musk is set to test the BFR for the first time later this year, with a view to sending two unmanned ships to Mars in 2022. Following this, the company will send four more ships to Mars in 2024, two with more cargo and two with the first humans. The goal is to develop a refueling station so the humans can return home after the mission.

Hopefully the first visitors to Mars don’t have any trouble opening the pod bay doors.

More like this
Innovation
Jan. 25, 2023
Starship orbital flight: SpaceX successfully loaded the rocket with over 10 million pounds of propellant
By Mike Brown and Molly Glick
Entertainment
8 hours ago
Kingdom of the Planet of the Apes Plot Details Reveal a Unique Twist
By Mónica Marie Zorrilla
Entertainment
Feb. 6, 2023
The Last of Us Episode 4 Delivers the One Thing Missing From the Show
By Alex Welch
LEARN SOMETHING NEW EVERY DAY.
Related Tags
Share: