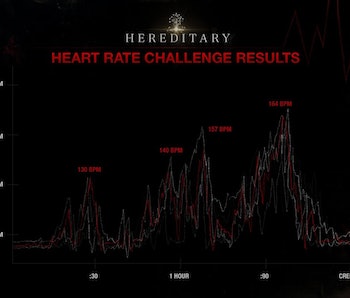 A24’s Hereditary is making a play to be one of the most psychologically, stressful movies in recent memory, but now data suggests it will take a toll on your nervous system as well. Recent results from the film’s Heart Rate Challenge show the results of five moviegoers whose heart rates spiked as high as 167 beats per minute while watching the terrifying film. If this data checks out, the film will make history as the most physiologically stressful movie in the history of horror.

The spikes in the Heart Rate Challenge graph show that Hereditary’s guinea pigs experienced scares that were especially intense — perhaps even implausibly so. “I wouldn’t say it’s entirely impossible but it would be very unlikely,” says Dr. Patrick Valcke, a third-year anesthesia resident at the University of Saskatchewan, in an interview with Inverse. “I buy that they’re all together, maybe that’s when someone is coming at them with a knife or something.”

Valcke explains that heart rate is typically controlled by two subcategories of the autonomic nervous system. One of these systems, the sympathetic nervous system — also known as the “fight or flight” system — is stimulated when someone is either in the midst of a dangerous experience or has triggered memories of a previous trauma. This feeling of impending danger initiates the release of adrenaline and noradrenaline into the cells that enervate the heart, resulting in a higher heart rate.

Valcke believes that it is possible to see heart rates as high as those in the Hereditary Challenge, but it would require a certain predisposition toward the content of the film. “[It] is a high baseline,” he says of the graphs. “Maybe they found five people who had a past experience with murder or death.”

There is already some evidence that horror movies can cause universal spikes in heart rate across audiences as plot develops or people get murdered in gruesome ways, though the verifiability of that data is questionable. In 2014, Christopher Stock of the Centre for Sports Medicine and Human Performance at Brunel University conducted a study where a group of volunteers watched the 2014 horror film As Above/So Below. The journal article that should have resulted from this study is conspicuously absent, but The Guardian, in 2014, reported “someone’s heart rate hit 82bpm right at the end of the film the highest of anyone’s throughout the entire movie.” If the results of the Heart Rate challenge are real, then it means that Hereditary more than doubled the maximum heart rate measured in Stock’s experiment.

In another questionably scientific experiment, The Huffington Post had an audience of unknown size watch The Shining, The Exorcist, and Nightmare on Elm Street in 2013, finding that their audience’s average heart rate rose to only 100 BPM even during the most horrifying scenes.

In this context, the high heart rates of the Hereditary challenge seem to be wild outliers for a psychological horror film where there is no real threat of death. Instead, the heart rates seen in the challenge are more aligned with heart rates measured during intense exercise.

Horror: Not As Scary As Exercise

Applying the American Heart Association’s (AHA) formula for target heart rate — a way to gauge exercise intensity — the 100 BPM heart rate peak reached in the Huffington Post experiment is what one might expect from “moderate exercise intensity.” That is, it’s 50 to 70 percent of a person’s maximum heart rate (roughly calculated by subtracting your age from 220). On a fitness tracker like a Garmin Forerunner, that would classify the heart rate spike induced by Freddy Krueger as “recovery” or “easy.”

Now let’s apply that same heart rate analysis to Hereditary. According to Mashable, the Heart Rate Challenge originally involved 20 individuals, but only data on five people — all of whom were pushing over 125 BPM barely 20 minutes into the film — made it to the chart. Analysis is tricky without knowing the ages of these participants, but assuming a 20-year-old viewer, the 164 BPM maximum that viewers experienced just before the end of the film would amount to 83 percent of the maximum heart rate. That’s “vigorous” exercise, according to the AHA’s guidelines. For a 35-year-old, 164 BPM would be 90 percent of the maximum heart rate. On the Garmin fitness tracker blog, this is described as “harder intensity” effort: “You can reply in only single word responses.”

Depending on your age, if your heart rate watching Nightmare on Elm Street is akin to a walk in the park, watching Hereditary would be like running a moderately paced 5k.

Unfortunately, it doesn’t seem as though putting the stress on your heart would be worth it. Even if Hereditary does stimulate your sympathetic nervous system to 5k levels, Valcke says you wouldn’t be reap any training benefits.

“You don’t derive the same physical benefits. [In exercise], you’re engaging all kinds of muscles,” he says. “That doesn’t happen sitting watching a movie for two hours.”

More like this
Mind and Body
6.21.2022 10:00 AM
What is hybrid immunity? Two experts explain the mix of vaccination and infection
By Grace C Roberts, Lena Glaser and The Conversation
Culture
6.17.2022 11:31 AM
45 years ago, the worst Exorcist sequel almost killed the franchise forever
By Jon O'Brien
Mind and Body
6.25.2022 1:00 PM
Why “micro workouts” can have significant mental and physical benefits
By Sam Reiss
Related Tags
Share: