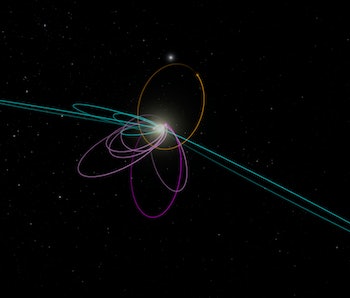 The gravitational pull exerted by our solar system radiates out in a full three dimensions, although our home system’s most well-known planets circle the sun in a flat two-dimensional plane. In the far-out scattered disc and the inner Oort cloud, however, a handful of minor planets mysteriously orbit the sun perpendicular to that plane. Some believe that a phantom body called “Planet Nine” is out there surreptitiously exerting its influence, but a new theory presented Monday at the 232nd meeting of the American Astronomical Society suggests less cryptic forces are at play.

The original Planet Nine theory, proposed in 2016 by Caltech scientists Michael Brown, Ph.D. and Konstantin Batygin, Ph.D., argues that the phantom planet’s wide orbit and hefty gravitational pull could account for the curious orbits of those small icy worlds. The three astrophysics researchers behind the new study — haters who I can only assume dislike the glamour and mystery of a possible Ninth Planet — attempt to explain these orbits without hypothesizing any fantastical celestial crypto-body ten times the mass of Earth. It’s a compelling theory, but Batygin tells Inverse it falls short. He thinks that Planet Nine could still be out there.

The UC Boulder researchers developed a computer model that illustrates how mutual gravitational forces between the minor planets, also known as “Trans-Neptunian objects” (TNOs), might keep them all in their perpendicular orbits. Just like the gravitational pull between Earth and its fellow major planets keep them all in a tight, flat formation, they write, the pull between these smaller objects, like the weird minor planet Sedna, might be keeping them in line, too — no alleged hidden giant like Planet Nine required. “We are just concerned with the detached population of TNOs,” one of the UC Boulder researchers, undergraduate Jacob Aaron Fleisig, tells Inverse via email. The computer model’s exclusive focus on TNOs is an essential caveat to UC Boulder’s new alternative explanation for all those “Planet Nine” effects, one that some early reports have largely overlooked. In fact, the influence that Planet Nine allegedly exerts goes far beyond just the TNOs, suggesting that the new findings are just a minor snag.

Over the past two years, Brown, Batygin, and others have found more evidence suggesting the mysterious planet exists. Most notably, in 2016, their Astronomical Journal article showed that an as-yet-unexplained six-degree skew between the sun and our solar system’s inner planets could also be caused by the proposed Ninth Planet. “Our model does not provide an explanation for the tilting of the sun’s axis with respect to the inner planets,” Fleisig admits. Furthermore, says Batygin, the UC Boulder computer model also presupposes the existence of a large, undetected mass of orbital matter — just not a single gargantuan one with a cool name and a target on its back like Planet Nine. Investigations on the Kuiper belt, where that undetected matter should exist, haven’t turned up objects with even the mass of one Earth, much less one that’s ten times its mass, which is what would be needed to account for the effects attributed to a Planet Nine-like object.

“All of this said, I think it is actually very valuable to consider alternatives to the existence of Planet Nine,” says Batygin. “If another model could explain the anomalous structure of the distant Kuiper belt without invoking Planet Nine, that would be of tremendous interest. Unfortunately, I don’t think this is that model.”

More like this
Science
Jan. 22, 2023
Astronomers find a surprise layer of volcanic rock in Mars’ massive canyon
By Kiona Smith
Science
Jan. 14, 2023
15 years ago, a spacecraft swung by Mercury to beat the Sun's gravity
By Allie Hutchison
Science
Jan. 12, 2023
No, the Curiosity rover didn’t find gem opals — but it may have found something more important
By Doris Elín Urrutia
LEARN SOMETHING NEW EVERY DAY.
Related Tags
Share: