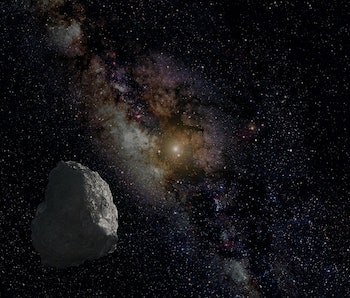 Astronomers have located an object in space that’s over nine billion miles from the sun, putting it three times farther away than Pluto — that’s 103 times farther from the Sun than Earth — making it the most distant body yet to be discovered in our solar system.

Designated V774104, it’s a dwarf planet about 300-600 miles in size. The object’s orbit is yet to be determined, and due to its distance from the sun it could potentially be a part of the Oort Cloud.

The Oort Cloud, a hypothetical sphere of comets and other icy bodies located a full light-year from the sun, is believed to represent the end of the sun’s gravitational influence. Objects within the Oort Cloud have eccentric orbits that cannot be definitively explained by the known structure of the solar system.

If V774104 ends up proven to orbit inward closer to the sun, it could be classified with objects whose paths are explained by gravitational interaction with Neptune (Trans-Neptunian Objects), like Pluto, in the Kuiper Belt — a debris field that stretches from the orbit of Neptune out to about 4.6 billion miles from the Sun. On the other hand, if it never comes closer, it would end up in a class with objects like Sedna.

Sedna, at almost eight billion miles from the Sun, is too distant to be affected by the gravity of Neptune. However, it’s still close enough to the sun to possibly not be a part of the Oort Cloud. In this case, V774104 would join Sedna as a potential “inner Oort Cloud object.”

V774104 replaces Eris, a Trans-Neptunian dwarf planet with a moon (Dysnomia) that orbits the Sun, as the known most distant object of the solar system.

More like this
Science
6.14.2022 6:10 PM
Europe’s space agency greenlights Comet Interceptor to study the next ‘Oumuamua
By Kiona Smith
Science
6.27.2022 8:15 PM
NASA mission to an ancient mini-planet in our Solar System suffers major setback
By Doris Elín Urrutia
Science
6.27.2022 10:00 AM
Astronomers spot a galaxy “supercluster” almost as old as the Big Bang
By Nancy Atkinson and Universe Today
Share: