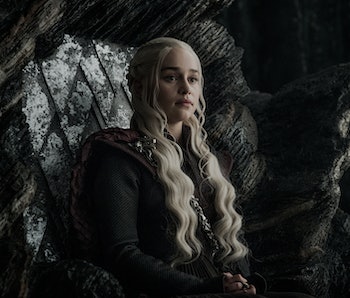 The Mother of Dragons has big plans for Game of Thrones, and it’s probably not going to end well. In a new interview, actress Emilia Clarke — primed to enter a galaxy far, far away as Qi’ra in Solo: A Star Wars Story — teases that fans aren’t going to like Daenerys Targaryen (if they don’t already) when Game of Thrones caps off its epic eighth and final season on HBO.

In the cover story of the latest issue of Vanity Fair, Clarke reveals that she has already shot her final chronological scenes as Daenerys. “It fucked me up,” Clarke says about the scene, “Knowing that is going to be a lasting flavor in someone’s mouth of what Daenerys is . . .”

In a separate interview with Herald Sun, Clarke also said the finale will make people scream. “People will scream and people will say, ‘That’s exactly what I wanted’,” she said. “And some people will go, ‘Huh?’ — my mum, probably.”

It’s a vague word jumble, to be sure, but reading between the lines, it’s clear Daenerys isn’t going to be everyone’s favorite when cable’s blockbuster fantasy series finally comes to an end next year. All throughout Game of Thrones, Dany has repeatedly fallen upwards, making pretty bad decisions that somehow play out in her favor. Last season, Dany formed an alliance with Jon Snow, the bastard/prodigal son whom she (unknowingly) shares blood relation. It’s going to be very, very weird when they get out of bed and find this out together.

What more could Dany do that will make her appear unfavorable in people’s eyes? At this point, it could be anything. But at least she didn’t orchestrate a massacre during a wedding reception. Nah. She only rode in on a dragon and burned a hundred dudes alive like it was raining napalm in Vietnam.

But we won’t find out for another year, as Emilia Clarke will return as Daenerys of the House Targaryen, the First of Her Name, the Unburnt, Queen of the Andals, the Rhoynar, and the First Men, Khaleesi of the Great Grass Sea, Protector of the Seven Kingdoms, Breaker of Chains and Mother of Dragons, in the Season 8 finale of Game of Thrones next year.

Solo: A Star Wars Story hits theaters on May 25. Game of Thrones returns to HBO in April 2019.

More like this
Entertainment
7.31.2022 12:00 PM
'House of the Dragon' will obliterate one annoying 'Game of Thrones' rule
By Alex Welch
Entertainment
8.12.2022 11:00 AM
Neil Gaiman teases a Sandman prequel on Netflix. Here's what that means.
By Mónica Marie Zorrilla
Culture
8.5.2022 10:30 AM
How Netflix's epic Sandman finale sets up Season 2
By Mónica Marie Zorrilla
Related Tags
Share: