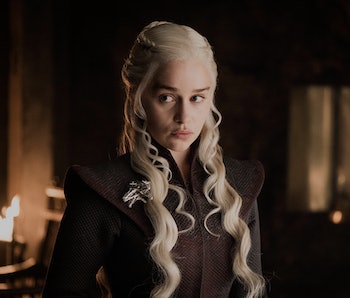 When winter finally comes, some Game of Thrones fans will be discontent. Emilia Clarke, who plays Daenerys Targaryen on HBO’s hit series, says that the divisive series finale is going to leave some fans scratching their heads, which is the type of ominous comment that we, frankly, shouldn’t get too worked up about.

Speaking to the Herald Sun ahead of the release of Solo: A Star Wars Story, Clarke gave just the tiniest hint about how Game of Thrones will wrap up next year.

“People will scream and people will say, ‘That’s exactly what I wanted’,” she said. “And some people will go, ‘Huh?’ — my mum, probably.”

As far as fan reactions to series finales go, “huh?” is really not that bad. Imagine if How I Met Your Mother’s infamous last episode merited only a shrug rather than the massive backlash it rightfully earned. “Huh?” indicates, maybe, that some viewers won’t quite get it. Will Thrones pull something as artistic and audacious as the Mad Men or Sopranos finales? Probably not, as the show doesn’t have a history of drawing attention to its own artistry in quite the same way.

“Huh?” also seems like an underwhelming confused response if Thrones ends with some type of bonkers reveal that Bran was actually the Night King this whole time. This theory, which would be a wildly out-of-place swerve for Thrones to pull in its last few episodes, is insane, and would probably elicit a stronger response. The show probably won’t end with a massive revelation that changes the entire series so much as it will end on a note that not everyone will love or get. That’s fine.

Not all series finales are universally beloved. If Thrones didn’t leave some fans a little confused, it could mean the series wasn’t challenging enough. Clarke’s comments aren’t that revealing, they’re just, potentially, encouraging. Probably best not to read into them too much.

Having said that, if I were Clarke’s mum and the character my daughter played died in the last episode, I’d probably say more than just “huh,” for what it’s worth.