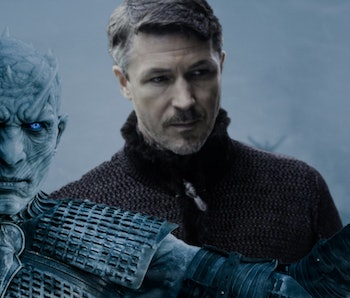 The final season of Game of Thrones is still about a year away, which gives fans plenty of time to think about what might happen when HBO’s epic fantasy season comes to a close. One theory — an impressive 45-page, three-part Reddit posting — started getting some buzz for being such a bold and vivid prediction of what could happen in Season 8. It’s nigh-impossible to summarize, but the Cliff Notes is that it involves book-only characters, Littlefinger faking his death and ultimately sitting on the Iron Throne, Jon and Daenerys having surprisingly minor roles, and Bran, as the Night King, fighting to save mankind from himself.

In a series of posts last week, redditor MrSilenceT outlined his elaborate theory for how GoT will end. After Esquire picked up on one thread of the theory, folks on the Game of Thrones Reddit started to take notice.

If you want to fully experience this theory, head over to the original Reddit post and start reading. It’s a sprawling, very thought-out prediction, and it’s impressive. I also don’t think it’s even close to being true. But, MrSilenceT — a 29-year-old with a Ph.D. in Pharmacy who hasn’t written a fan theory before — was happily ready to defend his theory in a lengthy Google Hangout conversation with me on Monday.

“I am ready to debate the points you said earlier, about why this can’t happen, but it’s better to be blown away when you see it, I think,” MrSilenceT wrote.

He explained that he came up with the idea for the theory when he realized that, as he put it, A Song of Ice and Fire author George R. R. Martin was “baiting us into thinking the ending would be about a giant battle between good vs evil. When it was the exact thing he had said repeatedly fantasy did not need more of.”

He combined that with a spin on the idea that Bran Stark is the Night King (or is at least responsible for its creation), thanks to his time-traveling abilities as the Three-Eyed Raven, and realized that Bran, and the Night King by extension, had to be “working towards something good.” Then he was convinced by another theory he saw about how Littlefinger had faked his death at Arya’s hands.

“I asked myself, ‘Why the heck bring Littlefinger back so late in the game?’” MrSilenceT explained. “Then I rewatched the Littlefinger scenes and [Aidan Gillen’s] interviews, and everything made sense.”

“And I realize, this guy is Martin’s hero,” he continued. “He’ll make him sit on the throne.”

From there, MrSilenceT kept expanding on and predicting what might happen given these two assumptions. The resulting theory is engaging, entertaining, and shockingly not that hard to follow.

But, for it to be true, assumptions on top of assumptions have to be true. Should one bit of MrSilenceT’s characterization be off at the ground floor, the whole structure could come tumbling down, to say nothing of some of the larger leaps. Littlefinger needs to be alive and Bran needs to be the Night King. I personally loathe that latter theory. The Song of Ice and Fire series is full of extremely bold narrative twists (Remember when we thought Sean Bean’s Ned Stark was the main character?), but turning it into a metaphysical time travel story without any explicit exposition at the eleventh hour sounds a little too much for TV. Plus, Isaac Hempstead Wright debunked the theory at the end of last season, though there are assuredly ways to argue that he technically didn’t.

Still, MrSilenceT is confident. “It’s a 45 page post with at least 50 theories in there,” he wrote when I asked him how much stake he really had in his theory. “But I am very confident 80 or 90 percent of it should be true.”

I told MrSilenceT I would Venmo him money for a beer should that turn out to be the case. I’m confident enough that something — anything — else will happen in Season 8, and that I’ll never have to actually deal with this small breach of journalist ethics. That said, I’m not about to welch on a bet, so watch this space in about a year and change.

I pressed MrSilenceT on what I thought were weaknesses in his theory, and he was extremely good-natured and happy to push back. If we, as a culture and as fans, have decided to take Game of Thrones seriously, then let’s also take that same level of seriousness and discernment to fan theories. After all, in science you need to test a hypothesis.

But, whether or not the theory is true matters less than the mere fact that it — or any theory — was created in the first place. Playing guessing games is fun, and getting into it about whether or not a theory is insane is its own sort of fun, too.

“I was just compelled to write this stuff down and to share it with people, as it had me hyped up for four days and I figured it all out,” MrSilenceT wrote.

I’m not so sure he has figured it all out, but I’m honestly thrilled that he tried.

Game of Thrones Season 8 will premiere in spring of 2019.