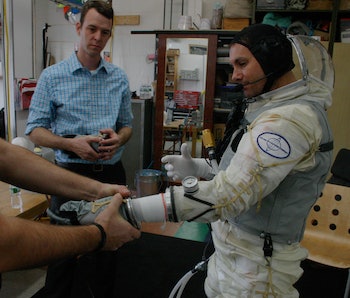 Exploring the great unknown has been a dream of humanity since we first looked up into space. Now the likes of Blue Origin and SpaceX have come pretty close to making it a reality. Besides the insane rocket science and engineering that goes into space exploration, there is one detail that might go overlooked by the general public: spacesuit design, of course!

Humans are nothing but squishy meat sacks that would be torn apart by the monolithic forces of space. And SpaceX’s gear might be valuing aesthetics over functionality a little too much, says high fashion fabricator-turned-spacesuit designer Ted Southern, who is president and CEO of Final Frontier Design, which has been developing spacesuits since 2006.

Southern speaks with Rae Paoletta on I Need My Space, the Inverse podcast about all things extraterrestrial, to explain that looking like a total dweeb in space is much better than being a chic astronaut.

“I think that the best spacesuits are all about functionality, their aesthetic is the classic ‘form follows function,’” Southern says, adding later: “For our suit, we have focused on its functionality; that’s really been our prime goal from the astronaut glove competition, on, it was all about mobility, low-torque, range-of-motion, dexterity, tactility, comfort, user interface, and whatever safety necessities are part of the system.

“There’s not a lot of room for zhushing, so I really struggle with how to address aesthetics in the suit. There are trade-offs.”

Southern: Much respect to SpaceX; their suit is very tight-fitting, and that will restrict mobility.

Paoletta: It definitely looks like something from a Daft Punk show.

Southern: It’s cool. I’m psyched to see it. It’s a new look for a spacesuit, but it’s going to mean their astronauts aren’t going to be able to move that much when there’s an emergency.

At Final Frontier Design, an aerospace safety garment design firm, Southern’s suits primarily focus on performance and user experience. Things like mobility, wide range of motion, and dexterity are all things he says go into an FFD suit.

SpaceX’s stellar suits might look like something from a Daft Punk music video. You’ll probably thank Southern for making you look a bit more like the Michelin Man when you make it back to Earth in one piece. Plus, who wants to float around in skin-tight fabric for hours? Functional space sweatpants are the future.

Check out more from the conversation with Ted Southern in the eighth episode of I Need My Space. It’d mean the world to us if you subscribed, rated, and reviewed the show.