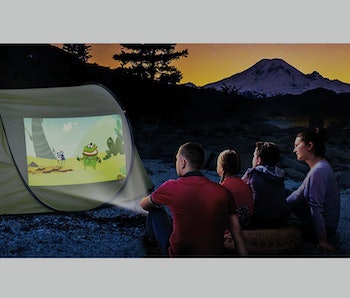 Despite being geared towards a young audience, the standalone projector Cinemood is great for parties, my friends and I were happy to discover when I broke out the palm-sized, wifi- and Bluetooth-enabled projector at a weekend rental in April. Don’t let the plethora of Disney apps fool you, the Cinemood streams music videos and Netflix just fine.

As anyone who’s ever tried to organize an impromptu movie screening knows, “projecting” usually requires cumbersome hardware that can also be pretty noisy. Heavy projectors usually require loud fans and are either bolted onto ceilings or carted around.

Cinemood hopes to refine the experience by targeting a completely different audience: children, though it’s clear that grown-ups will find a lot to like about the device as well. The small white cube is roughly the size of an apple, and wifi and Bluetooh capabilities mean anyone can use the device to project crisp video onto just about any surface without using any wires at all. It’s been a long time coming, Paul Zhuravlev, Managing Director of CINEMOOND USA tells Inverse.

“Why is there no projector someone can take and pick up to make a presentation?” Zhuravlev said. “Kids are much more flexible. They see it as a cool toy. They project on the ceiling, on the wall, on the white plate in a restaurant.”

For families, at least, Cinemood offers a great alternative to the screen-obsessed masses, especially when it was designed to be “cute” to begin with. Rather than an adult relinquishing their smartphone to their children so they might play a few rounds of Candy Crush, they can instead hand over the Cinemood, which has a slew of projection-based Disney programming for children to enjoy. There are stories from Frozen, Cars, and Toy Story to name a few. Cinemood also has slide-based eBooks to interactive games, with plans to introduce AR games down the line.

“Everyone knows that screentime is bad for the kids,” Zhuravlev said. “Projection is much safer.”

But the enticing and less talked-about use-case for Cinemood are those for adults: Perhaps the most portable and crisp projector on the market, capable of streaming Netflix onto any surface, anywhere, at any time, and even without wifi. Cinemood might come pre-loaded with tons of Disney-themed apps for children that seem totally fun, but the best thing they did to open the device up to a wider audience is integrate third-party viewing apps like Netflix.

At the aforementioned weekend party, friends and I rented a house in upstate New York, complete with a hot tub and indoor pool. Late at night, we sat in the hot tub with the Cinemood perched on a tall table, playing music videos on the far wall. The projection range can widen out to 12 feet with buttons right on the side of the body that can adjust the focus accordingly. But you can even connect to an iPhone app — or even Apple Watch — to control the device when you need to type out text to search within a particular app.

Having used the device in a number of circumstances, I have to agree. The audio that comes from the device is simply adequate, but you can ramp up the sound quality by connecting syncing it to external speakers. For a tech-savvy audience with enough devices to augment the experience, Cinemood can be a real game-changer, mainly because it’s so portable and practically silent.

“We wanted to make it silent from very beginning,” Zhuravlev said. “The problem for most projectors is usually they sound like a little helicopter in the room, because of the fan cooling the projector. We wanted Cinemod to be as silent as possible without a fan, especially. It’s a powerful processor and optical module that doesn’t need a fan.”

As such, Cinemood is a real game-changing projector, regardless of whether or not the kids using it are under 12 or over 20, because the projection experience will be just as good either way.

The $399 price point might be a bit high for some. But consider that Cinemood’s portability and ease of use make it a potential game-changer in the world of projectors, as well as a life-changer in the hands of roommates looking to liven up their shared space, or the superhost looking to take their parties to the next level. And yes, this device is beyond cool if you’re a just a kid looking to watch and play anything Disney.