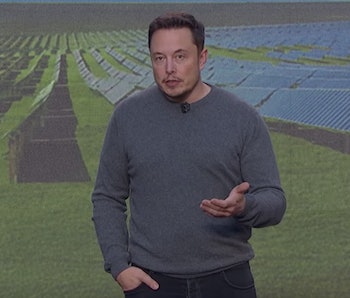 Elon Musk is seeking the wisdom of crowds for Tesla’s first quarter 2018 earnings call on Wednesday. The CEO responded affirmatively to a request on Twitter Monday that the quarterly conference call — typically an opportunity for seasoned analysts to grill management — takes one question crowdsourced from retail investors.

The call is an important moment for Tesla, as it seeks to reassure the markets that its plan to produce the $35,000 Model 3 is showing promise. Galileo Russell, a writer at SeekingAlpha and CEO of Hyper Change TV, told Musk that over 150 shareholders representing 63,000 shares (over $18 million) had reached out over the past four days to get Russell on the call. Supporters of Russell’s campaign noted how retail investors may have different questions to sell-side analysts that also concern the quarterly earnings results. In classic Musk fashion, the CEO confirmed the company change through his Twitter account with a single “Ok.”

The decision is a big win for investors looking to find out more about the company. While anyone can listen live to the call, even members of the press aren’t invited to ask questions — Wall Street Journal writer Charley Grant followed up by asking Musk if there’s a chance that could also change.

The earnings call will be a chance for Musk to update the public on its various projects. Internal e-mails suggest Model 3 production has reached a steady rate of around 2,000 per week, better than the 1,400 per week rate projected by Goldman Sachs at the start of this month. A high production rate means more of the 400,000 or so $1,000 reservations converted into sales starting at $35,000, funding future projects like the Semi truck and second-generation Roadster.

The call is set to start on Wednesday at 2:30 p.m. Pacific time, after the markets have closed and the company releases its Securities and Exchange Commission filings.

It’s unclear at this stage what Russell will choose to ask for the call. A Twitter user called Rachel responded to Musk, asking if Russell’s original question to join the call counted as his one crowdsourced question.

More like this
Innovation
8.8.2022 10:00 AM
A wild new plane-train hybrid could whoosh you to your destination — if it can get off the ground
By Molly Glick
Entertainment
8.5.2022 12:30 PM
For All Mankind Season 3’s space mogul is better than Elon Musk — here's why
By Ryan Britt
Gaming
16 hours ago
Overwatch 2 is ditching the game industry's worst feature
By Willa Rowe
Related Tags
Share: