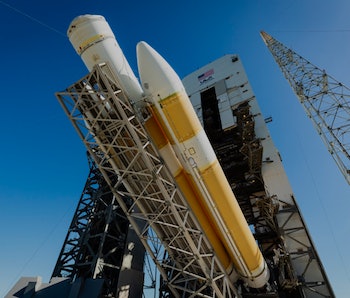 In July, NASA will make another first for the agency and humankind. It will send the first ever probe to the sun in order to learn more about the big ball of fire that is the center of the solar system. NASA gave the first glimpse of the rockets carrying the probe into space at an event held last week.

The Parker Solar Probe, named after astrophysicist Eugene Parker, will launch on July 31 to the sun’s corona. NASA showed the Delta IV Heavy launch vehicle that will propel the probe to the star at Launch Complex 37 at Cape Canaveral Air Force Station in Florida on April 17. These will be the largest and most powerful rockets the agency ever used and will reach speeds of 430,000 miles per hour.

NASA announced the Parker Solar Probe mission last year. It plans to have the probe get within 3.9 million miles of the sun. At that distance, it will start collecting data about the sun’s atmosphere and solar winds. The hope is to use the data to predict when a solar storm could affect the Earth and why the sun’s atmosphere is actually hotter than its surface.

The Parker Solar Problem launch will take place at 4 a.m. Eastern on July 31. It will be the fastest human-made object in the solar system when it takes off.

While the sun may be the focus for NASA this year, the moon is back on its radar. Plans are already in motion to put the first lunar outpost in orbit by 2025.