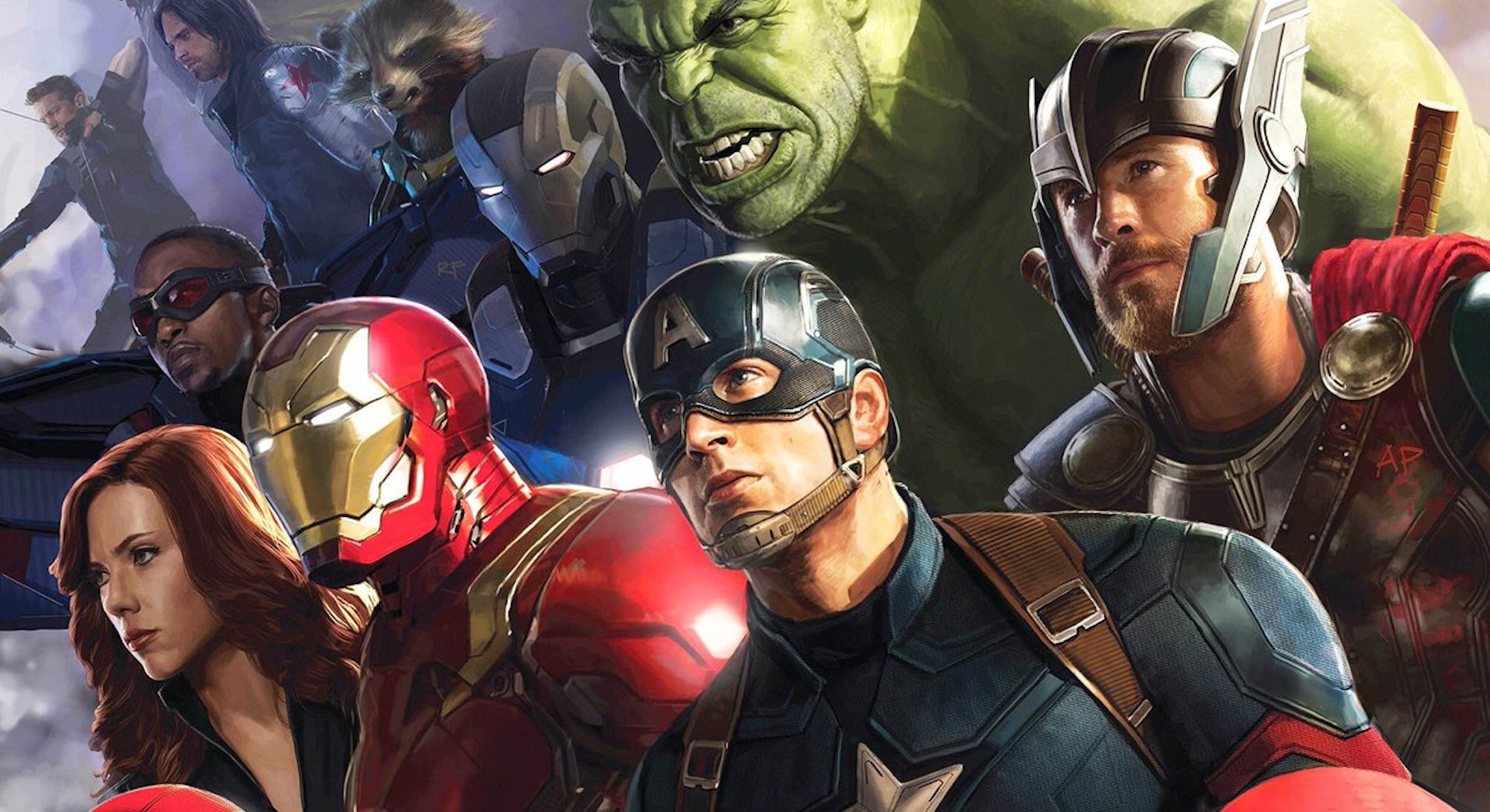 The reason the Avengers look as marvelous as they do is because Andy Park’s parents were actually pretty chill.

Growing up in California, Park’s Korean immigrant parents eased up on pushing their youngest child, or maknae, into a “real” job. As his two older siblings became lawyers and businessmen, Park — inspired by his love for Iron Man comics — enrolled in art school at UCLA. But he dropped out at the age of 19 to join comics publisher Extreme Studios, which kicked off a long career in illustration. “I just wanted to follow my dreams and ambitions,” Park said in a 2015 interview with KoreAm. To his surprise, his parents didn’t argue. “That’s not common among Korean-Americans.”

Over two decades later, Park is now the Visual Development Supervisor at Marvel Studios. And since 2011, he’s the guy who makes sure this sprawling superhero canon looks not only unique, but consistent.

Avengers: Infinity War — out this weekend in theaters worldwide — is Park’s fifteenth Marvel film, a stint that began with Captain America: The First Avenger in 2011. His work continues in Infinity War and beyond, including 2019’s Captain Marvel. For years, Park’s vision has given unity to Marvel’s film franchises, whether they take place in Wakanda, Asgard, or Hell’s Kitchen. While everyone answers to studio boss Kevin Feige, Marvel’s Visual Development may be the secret weapon of the MCU.

“We know these films [have] individual characters, but they always end up joining together,” Park tells Inverse over the phone. With his most recent credits, Thor: Ragnarok and Black Panther (the latter supervised by his colleague, Ryan Miendering), Park explains why it won’t be an eyesore to see Thor and T’Challa together in Infinity War. “Even though Black Panther and Thor, are two completely different looks, it is amazing when you see them together.”

Simply put, the comics influence the movies, and Park is very much a part of that realm. “Everything we do, there’s a source material I’m looking at,” he says. “It starts with the Marvel comic, and the decade they’d been published.” For Ragnarok, the film’s designs were inspired by classic comics from Jack Kirby, as well as modern works from Jason Aaron, like his 2012 series Thor: The God of Thunder and The Unworthy Thor published in 2016.

“I was a Marvel reader in junior high, high school, and I worked as a comic book artist for the first ten years of my career,” he says. “I have the utmost respect for the source material.”

Park’s career began at Extreme Studios working for Rob Liefeld, the co-creator of Deadpool and one of the founding fathers of Image Comics. He first met Liefeld at San Diego Comic-Con, where Park sought the famed X-Force creator for advice. But after chatting with him and showing his portfolio on the convention floor, Liefeld offered the young Park an internship. “I was kind of flabbergasted,” Park recalled to Seoul Journal in 2016. Liefeld later told Park he wasn’t “quite ready,” but lent him scripts to practice his craft. Six months later, Park was called up to begin his internship that Monday.

When Extreme folded in 2000, Park continued working for comics publishers like Top Cow, Marvel, DC, as well as Maxim magazine. In 2005, Park joined Sony, where he developed the visual style for the God of War video game franchise. It was at Sony where Park met Ryan Miendering, a freelancer who landed at Marvel for 2008’s Iron Man, and Charlie Wen, who joined Miendering at the studio.

Suddenly, there was an idea: To bring together a group of remarkable people who could design the look of the ambitious “Marvel Cinematic Universe.”

“Before they started Avengers, they [Marvel] told them [Miendering and Wen] to create a visual development team, knowing there’s going to be a whole set of connected films,” Park tells Inverse. In the same way Nick Fury sought remarkable heroes, Marvel sought remarkable talent, because “They knew it would be a good idea to create an art team that create this cohesive look.”

Park says Marvel’s decision is atypical to most franchise filmmaking, where each movie is made up of new talent riffing on previous artists. “They thought it would be their advantage to create a team,” he says. And so Miendering and Wen’s first hire was Park, whose first assignment was 2011’s Captain America: The First Avenger (though he spent one day working on Thor).

Park’s credits now span the vast majority of Marvel’s filmography, including The Avengers (2012), Captain America: The Winter Soldier (2014), Avengers: Age of Ultron (2015), Ant-Man (2015), both Guardians of the Galaxy films (he’s now working on the third), and Doctor Strange (2016). He didn’t supervise Spider-Man: Homecoming or Black Panther — those went to Miendering — but he did contribute to the Marvel/Netflix series Daredevil.

“Just a little bit,” Park reveals. “We did designs on the first [season of] Daredevil. Ryan ended up designing that. I designed the baton. But for the most part it’s separate.”

Over time, Park’s team developed a three-step criteria for design.

“They knew it would be a good idea to create an art team that create this cohesive look … “They thought it would be their advantage to create a team.”

Phase 1: Look at the Comics.

“First we always gather up, for any given character, the source material. Sometimes we’ll have conversations with Marvel, ‘Is there any particular look that you’re going for?’” Park explains. “Other times, we’re given free reign. Like when we did Iron Man 3, I’ll do a version of Iron Man based off of Mark Bright and Bob Layton, for the centurion armor.”

Phase 2: Figure Out the Story.

“Story dictates design,” he says. “We don’t just design. Will it have layers or not? That’s why I like Black Widow and Hawkeye, knowing when I design those, it’s going to be completely more tactical and realistic, versus Thor [who] tends to be more fantastical. Things that aren’t as ‘real world’ or practical, we take into consideration for the story.”

Phase 3: Filter Through the Director.

Filtering ideas through the director is how even this uniformed universe can produce stand-out movies. “The director is the third component,” he tells Inverse. “They’re the ones who have their own sensibilities, their own takes.”

When he was working on Ragnarok, Park heard from director Taika Waititi himself to go harder into the comic inspirations. “When I was designing Hela, Taika was like, ‘I want it to be more like the comic, forget about practicality.’”

For the last eight years, Park has seen the MCU evolve.

“The whole story of Marvel is risk,” he says. And he’s seen it all, from the unconventional directors to the dark horse actors who became stars almost overnight. It’s hard to believe, but before Iron Man, few people could imagine Robert Downey, Jr. as a cinematic superhero.

“The choices are risky,” says Park. “They’re able to see who made What We Do in the Shadows and see he can make a great Thor film. I don’t think any other studio would do that. They wouldn’t have the balls, you know?”

Avengers: Infinity War is a landmark production, both for studio executives and for devoted comic book readers who have followed these characters for decades. But it’s an especially important movie for Andy Park. Like the MCU, his journey began with Iron Man, whose epic highs and miserable lows transported him away from the classrooms of Canyon High. Now, on the eve of Infinity War, Park has the coolest seat in the house. “It’s special to me,” Park says about his ongoing gig. “Once they assemble the talent and the right team, you can create some magic.”