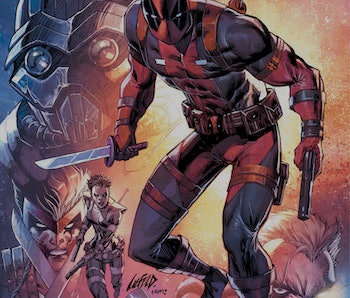 Since his debut in the pages of The New Mutants #98 back in 1991, Deadpool has wreaked havoc throughout the Marvel Universe, and all over Hollywood. It’s been a trip for Rob Liefeld, who witnessed his creation stick out like a crimson thumb at this year’s Golden Globes. “I’m smiling ear to ear as I tell you,” he tells Inverse, explaining that he’s still reveling in Deadpool’s Best Picture (Musical OR Comedy) nomination. The film ultimately lost to La La Land, but still, “It felt ridiculously awesome. If you’ve ever crashed someone else’s wedding or a party you knew you weren’t somebody designed to be there, that’s how I felt Deadpool was.”

But now, even in the midst of his Youngblood revival at Image Comics, Liefeld just can’t quit the Merc With a Mouth, as he’s back with the first Deadpool graphic novel, Deadpool: Bad Blood. Liefeld partnered with X-Men ‘92 writers Chris Sims and Chad Bowers for the new story, which follows an enemy from Deadpool’s past, Thumper — a brutal (and petty) villain who knew Wade Wilson and seeks revenge. To Liefeld, who inked and penciled the book, he describes Deadpool: Bad Blood as a time machine to the era of comics Deadpool was born in.

“Some people want comics to be important. I just want comics to be fun,” Liefeld tells Inverse. “Fun to me is a 10-page book between the Hulk and The Thing that I experienced as a kid, or Spider-Man battling Green Goblin high above the city. We set out to make a really fun romp that takes you on some fun adventures, [and] gives you a detour into 1991.”

The throwback aesthetic of Deadpool: Bad Blood isn’t a mid-life crisis for the 49-year-old Liefeld, who in the early ‘90s was (and still is) among the top names in the industry. Rather, it’s affirming of something Liefeld feels he’s been right about in comics all along: Style works and style endures. “One of the things I hung my hat on early in my career was drawing crazy action, action at the fore, and trying to take the language Jack Kirby used so well.” To Liefeld, Kirby “was possibly the best action artist ever” and studied him to understand power and energy on the page. “You do that between layouts and page design. It goes beyond rendering. It’s how you guide someone’s eye.” And in Deadpool: Bad Blood, Liefeld had the chance to guide readers’ eyes across 100 uninterrupted pages. “There’s no page breaks. There’s no catch-up — an uninterrupted 100-page story.”

When it comes to comic book styles, Liefeld is in a completely different realm. His aesthetics, which perfectly embody the masculine excess of ‘90s comics with bulging muscles and the abundance of ammo pouches, can be found in Liefeld’s X-Force and Youngblood for Image Comics. He recalls a story at San Diego Comic-Con in 2003, where he overheard one of the Big Two (he wouldn’t name which) take a jab at Image. “I sidled up to a publisher table where they said, ‘We don’t want this stuff looking like the Image guys. We want realism. Draw from photos.’ I was like, yeah, that’s not going to last.”

Years later, it’s hard to argue against Liefeld. Among the most successful comics of the modern age include The Walking Dead, Saga, and Matt Fraction’s Hawkeye, none of which sport a visual style that could be described as “realistic.” When the industry insisted on photorealism, Liefeld thought otherwise. “I’ve got to be honest. I thought comics were boring as hell at the time,” he says. What wasn’t boring was television. “On Cartoon Network, I was getting Samurai Jack, all those angular drawings, Powerpuff Girls. Suddenly, style left comics.”

Liefeld’s fans at conventions have only reminded him of the importance of style. “When I go to a show, people tell me how much they adore my Deadpool. I’m thrilled. My favorite artist of any character is the artist that took that character to the highest level. Spider-Man begins and ends with Steve Ditko. That’s my Spider-Man. For the Fantastic Four, it’s Jack Kirby.”

And Liefeld claims that kind of ownership over Deadpool. Though Liefeld worked on New Mutants with Fabian Nicieza, “Deadpool does not exist without me, period,” he says. That’s why Deadpool: Bad Blood is a Liefeld special, even with Sims and Bowers on the script. “It was fantastic to have their energy,” Liefeld said of the writing process. “I lay down the story and let [Sims and Bowers] put in the dialogue. Dialogue is important. Dialogue and snappy patter are why we love the best writers. Tarantino comes to mind.”

“That’s why, with this story, [I’m] doing my own thing,” he adds. “This story is grimy. It takes place on rooftops and alleyways and dirty warehouses. There’s soot.” All but for one moment, where Deadpool is transported to a tropical island. “The book is dark, dark, dark, dark, and then we’re going to this ray of sunshine before we go back to darkness. You’ll see it. It’s a great bit.”

One thing Liefeld doesn’t take credit for is the title, “willed into being” by Bowers, with intervention from pop royalty Taylor Swift. “I resisted [the title] at first. I have a team in Youngblood called Bad Blood. I said, ‘Look, I’m going to have to sit on this.’” Then, it was Halloween. “The next thing you know, Taylor Swift is wearing Ryan Reynolds’s Deadpool costume on Instagram. I’m flipping out because we love Taylor Swift in my house. I’ve got a 13-year-old daughter.” Liefeld laughs. “We blast her music. I am an unabashed Taylor Swift fan.”