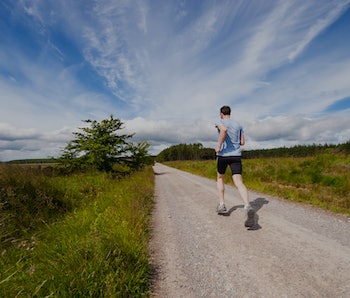 Not only is exercise an important part of a healthy diet, it may well be a solid diet in its own right. According to researchers from the Albert Einstein College of Medicine in New York City, working out is an effective way to both shed some weight and ward off hunger — as long as you’re working up a sweat.

In a study published in PLOS Biology on Tuesday, lead author Young-Hwan Jo, Ph.D., and five co-authors hit the gym with some mice in an attempt to explain the link between exercise and low appetite. The researchers already knew that exercise suppresses appetite, but they didn’t know how it did so. Taking into account the fact that exercise makes people really sweaty, they hypothesized that body temperature might be involved in reducing hunger. “As exercise is accompanied by increased body temperature, we hypothesized that a rise in body temperature during exercise plays a role in reducing food intake,” they write. So, they monitored the vitals of mice on treadmills while focusing on the activity of the hypothalamus, a brain region involved in regulating the body’s temperature and hormones.

It was natural to start looking at the hypothalamus because it controls hormones that, in large part, dictate appetite. By studying temperature levels in the hypothalamus while the mice were running and measuring their food intake afterward, the researchers found that their hypothesis was correct — it’s as if exercise flips a heat-activated switch in the brain, and appetite is suppressed accordingly. In particular, they found that reduced food intake was associated with a hypothalamic temperature of about 39 °C (102.2 °F) — a small but signficant step up from the normal mouse body temperature of 37-38 °C.

To make sure there wasn’t a confounding variable responsible for the decreased food intake of the mice, the researchers artificially stimulated the temperature-sensing TRPV1 receptors that live on the cells of the hypothalamus. They figured that if the appetite-suppressing effect of exercise really comes down to increased body temperature, then tricking the TRPV1 receptors into thinking they felt “hot” would also reduce the appetite of the mice. Sure enough, the effects of exercise and artificial brain stimulation were the same, demonstrating that it’s not working out that wards off hunger, but the temperature increase caused by exercise that suppresses appetite.

Based on these results, it seems like any significant change in body temperature should result in suppressed appetite. That probably doesn’t mean you should stick your head in the microwave to lose a few pounds, but it could explain why many people don’t want to eat when afflicted with a fever.

So next time you’re trying to eat less, maybe stay away from the dubious fad diets and go work up a sweat.