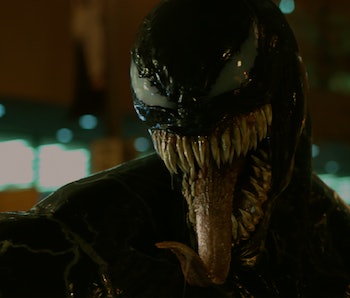 Coated in inky black goo and sporting teeth like a bony bear trap, the symbiote-powered Venom isn’t the typical mold for a superhero. But as the central protagonist in Venom, hitting theaters October 5, Venom has to have someone to fight against.

Enter: Carlton Drake, played by Riz Ahmed. If the comics are any indication, Drake and the Life Foundation will create five more Symbiote beings in San Francisco, forcing Eddie Brock to step up and do something good for once.

The trailer for Venom starring Tom Hardy surfaced online Monday, revealing what Hardy looks like when you dip him in radioactive car oil. And truth be told, he looks great! The film feels like such a throwback to “edgy” action flicks of the Nineties/Early-Aughts. It looks like Spawn, but directed by somebody who actually gave a damn about Spawn.

But because Venom is normally a Spider-Man villain, his solo movie has to put him up against someone worse. That someone will be Carlton Drake, a mysterious one-percenter who leads the Life Foundation. In the comics, specifically 1993’s Venom: Lethal Protector — which director Ruben Fleischer confirmed is one of the primary inspirations for the film — Drake leads the Life Foundation as a Noah’s Ark for rich people, who intend to use a force of Symbiotes to protect their utopia.

The Foundation does this by extracting some of the Symbiote out of Eddie, who at the time had escaped to San Francisco after reaching a truce with Spider-Man. Out of Venom, a five-man force of mercenaries, soldiers, and police officers are fused with Symbiotes, creating the Life Foundation’s “Guardians”: Riot, Scream, Phage, Lasher, and Agony. Expect these minions to fight Tom Hardy in the movie, unless one of them turns out to be Carnage.

Carnage is a popular rumor that’s followed Venom throughout its production, the most recent version of which involves Woody Harrelson (Natural Born Killers) in the role. A serial killer named Cletus Kasady, Kasady becomes Carnage when he fuses with the Symbiote, which enhances his already dangerous personality. The rumor is rooted in the fact Venom often fights Carnage in his comics; 1995’s Planet of the Symbiotes, which Fleischer also mentioned as a template for Venom, features the creation of Carnage.

Who wants to bet that one of the Guardian Symbiotes Drake makes ends up being Carnage? Or that Carnage ends up in the post-credits scene?

Unfortunately, because of the complicated rights issues between Disney-owned Marvel and Sony, Venom isn’t fighting nor teaming up with Tom Holland’s friendly neighborhood Spider-Man, with whom Venom has a traditional good guy/bad guy dynamic. In fact, the jury’s out on whether Venom will even share continuity with the MCU, while rumors of Holland playing Spidey in the movie are lofty at best. This leaves Venom the star of his own story, which is great for Venom fans.

One thing is for sure: Venom has its good guy. But Venom, an alien parasite that enhances aggression, and Eddie Brock, a disgraced journalist whom the Symbiote latches on to, are hardly what you’d call good guys.

Venom will be released on October 5.