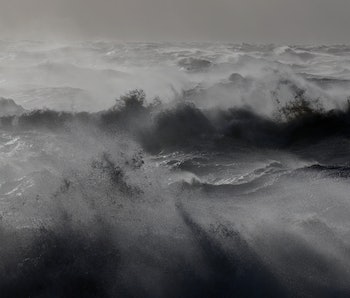 The Department of Energy has verified that the prototype wave generator Azura, which is currently anchored in Oahu’s heavily fortified Kaneohe Bay, is hooked into Hawaii’s grid and supplying power. This marks the first time electricity generated by waves has touched the American grid system, and it constitutes a make-or-break moment for a frequently overlooked source of renewable energy. Wave power is the dream — and it has been for a while.

The ocean’s kinetic power is pretty obvious to people who have eyes, but harnessing it has proved difficult. Different systems installed around the world (notably around Scotland) have never scaled. Part of the reason wave energy isn’t available in bulk is that the sea is unpredictable, powerful, and generally hard on hardware. Another reason is that no one is quite sure how best to convert the kinetic energy of swells into electricity.

The simplest option is to attach a buoy to a generator by a cable and have its motion drive hydraulic pumps, but scientists can also use the fluctuating pressure inside a submerged air capsule to drive a turbine, or the literal surge to fill reservoirs that then empty through a generator. Azura, which is itself a prototype for a larger machine to be constructed later, is a multi-mode point absorber that generates energy from the back and forth motion of the waves. It is uniquely efficient because it generates power from the push and pull.

The fact that Azura is installed and works is a massive achievement for Northwest Energy Innovations, the device’s builder, but it is not proof positive that we’re going to be plugging into the ocean anytime soon. Dozens of different wave power prototypes and no country or polis receives the bulk of its power from the ocean. That said, few technologies have made it this far so there is definite reason to keep an eye on Azura.

More like this
Entertainment
Jan. 31, 2023
The Last of Us Episode 3 Proves the Show Understands What The Walking Dead Forgot
By Hoai-Tran Bui
Entertainment
14 hours ago
Dune 2 Will Be Hilarious, Says Actor Whose Character Killed His Own Dad
By Ryan Britt
Entertainment
21 hours ago
Cassandro Unmasks the “Liberace of Lucha Libre” in a Breezy, Triumphant Drama
By Lyvie Scott
LEARN SOMETHING NEW EVERY DAY.
Share: