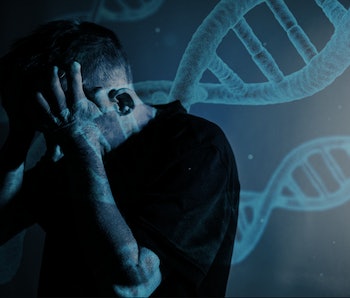 Depression affects approximately 322 million people worldwide, making it the largest contributor to global disability. However, the fact that depression is an actual illness rather than a mood is only beginning to gain traction. Advances in the genetic basis of depression is helping that happen: In 2015 scientists discovered the first two genetic markers linked to the development of major depressive disorder, and on Monday, researchers reported in a new study that the genetic link is even more profound.

In a paper published in Nature Communications, an international team of scientists reveal 80 more genes that are linked to depression. This discovery, they write, will help explain why some people are more likely to become depressed and may lead to the development of new treatment drugs.

“This study identifies genes that potentially increase our risk of depression, adding to evidence that it is partly a genetic disorder,” lead author and University of Edinburgh Research Center fellow David Howard, Ph.D., explained in a statement released Monday. “The findings also provide new clues to the causes of depression and we hope it will narrow down the search for therapies that could help people living with the condition.”

In this genome-wide association study, Howard and his team analyzed the genetic data of 322,580 UK Biobank participants, scanning for similarities in the genes of people with any of three depression-related phenotypes. Some of the genes they identified are involved in the function of synapses, the connections between neurons that allow brain cells to communicate to each other. After identifying all the depression-linked genes, the scientists confirmed their findings by cross-referencing their findings with anonymized data from 23andMe that had been shared with the consent of donors. The team writes that “self-reported measures of depression were highly genetically correlated with those obtained from the clinically-diagnosed depression phenotype.”

This study bolsters support for the theory that depression can be, at least in part, hereditary. Previous studies on twins found that the heritability of major depression disorder is estimated at 37 percent, although factors like being female and living in areas of greater social deprivation affect the development of depression as well.

“This could mean that in most cases of depression, around 50 percent of the cause is genetic, and around 50 percent is unrelated to genes (psychological or physical factors),” Stanford professor of medicine Dr. Douglas Levinson, who was not affiliated with this study, writes in his “genetics of brain function” explainer. “Or it could mean that in some cases, the tendency to become depressed is almost completely genetic, and in other cases it is not genetic at all. We don’t know the answer yet.”

At least 10 percent of Americans will experience major depressive disorder at some point in their lives — a huge number that underscores our need for answers. The authors of this new study write that because depression is a heterogeneous condition, there’s a need for even larger studies on its genetic roots in order to “improve diagnosis, treatment, and patient outcomes.” These nearly 80 genes linked to depression are there; now it’s time to see what doctors can do with that information.