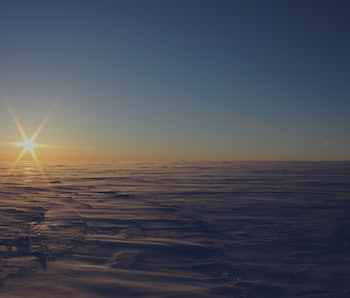 Deep in Canada’s frigid, northernmost reaches lies ice-covered Devon Island, the largest uninhabited island in the world. And for good reason, too: Temperatures there rarely go over 50 °F, and they can dip as low as -58 °F. The island is largely covered by the Devon Ice Cap, a glacier over 2,000 feet thick. Nobody thought there was much going on beneath the ice, but as researchers reported in Science Advances on Wednesday, the glacier has been hiding a pair of extraordinary lakes that aren’t that different from the water on Mars and Saturn’s moon Europa.

That there are lakes hiding beneath a glacier isn’t that special; many have been found under the ice sheets of Antarctica and Greenland. What makes the newly discovered “subglacial lake complex” so exceptional is that it’s hypersaline — super salty — unlike the others, which are freshwater, or slightly salty at best. Very salty water, which astrobiologists believe might exist elsewhere in the solar system, isn’t the most conducive to life, but recent research has suggested that microbes can survive in those conditions, and the newly discovered lakes present a new opportunity to study how that’s possible. The team, led by Anja Rutishauser of the University of Alberta, writes in the paper that the lakes are “compelling analogs for potential ice-covered brine lakes and lenses on planetary bodies across the solar system.”

Rutishauser and her team were simply trying to study the bedrock beneath the ice cap using radar when their devices sent back strange data suggesting liquid water beneath the glacier. Further investigation showed evidence of two lakes — one about 2 square miles, the other about 3.2 square miles — both of which, the team later deduced, had to be hypersaline in order to be liquid at such freezing temperatures. Unlike previously discovered subglacial lakes, these lakes don’t seem to be getting any input from nearby bodies of liquid water. The water in this pair of lakes, the researchers write, might have been trapped there for over 120,000 years, leaching salt from the salty bedrock below.

If that’s true, then it means any life that exists there might look completely different to anything we’ve ever seen. “If life exists in these lakes, it could have evolved in isolation since the area was last overridden by glacier ice, which was at least 120,000 years ago,” the researchers write, noting that the new lakes are “good analogs” for the briny water thought to exist under Europa’s ice shell or the polar ice caps of Mars.

The search for life on other planets rests on our understanding of how life could survive under extraterrestrial conditions that, at least to us, seem completely inhospitable. As scientists are discovering, however, we don’t need to leave Earth to study extreme environments: our landscapes are extreme enough. The newly discovered lakes are no exception, which is why the researchers think they’re “compelling targets for future exploration.”

Taking an investigatory dip into the water beneath the super-thick Devon Ice Cap won’t be easy. In 2004, scientists investigating bacteria in subglacial lakes in Iceland had to use a “drill” of boiling water to do so. Climate change, however, is causing the Devon Ice Cap to melt faster than usual, suggesting the hidden lakes may be revealed to the rest of the world much sooner than we might think.