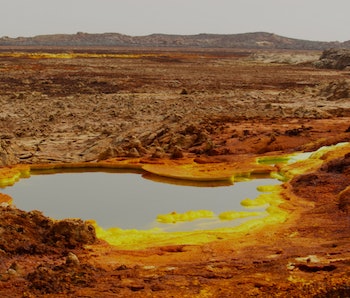 One of the most extreme and inhospitable environments on Earth, Ethiopia’s Danakil Depression, is giving scientists clues about how microbial life might survive on other planets. Boiling, oozing pools of sulfur in shades of yellow, brown, and red might not be ideal for those of us who enjoy not breathing chlorine and sulfur fog all the time, but scientists think the conditions are about as close as we can get here on Earth to approximating certain environments on other celestial bodies. The Danakil Depression, then, then is the perfect place to study the possibility of life on other worlds.

A recent research expedition from Europlanet identified three key ecosystems in the Ethiopian sulfuric wasteland, which looks like a cross between Yellowstone National Park and one of Mordor’s worst neighborhoods.

“First, you have a yellow area where most of the minerals present include elemental sulfur,” expedition leader Dr. Felipe Gómez of Madrid’s Centro de Astrobiología told Inverse. “Second one is brown and yellow, dark minerals, which represent different kinds of sulfates. And the third one is very dark red material mainly composed of iron oxides. Depending on the different minerals, the metabolisms of the microbiology associated with the areas are completely different.”

Three separate ecosystems, three separate metabolisms to study. Gómez also noted that the second and third ecosystems also exhibited “chimneys” formed by extremely hot water rising to the surface. The researchers can probably expect to find thermophilic bacteria associated with those chimneys, which will also be beneficial to study.

So what does this tell us about life on other worlds?

“In the case of Mars, this is very clearly related,” Gómez said. “In the case of this iron-rich ecosystem, there are several places on Mars which are also very iron-rich. Going farther, in Jupiter’s Europa moon, we are expecting very clear sulfate-associated minerals. Most of the yellow and red lines, there’s tremendous discussion about that — there could be sulfur-associate minerals there and probably iron-associated minerals as well.” The more information the researchers can analyze about how bacteria manages to survive in the bog of eternal stench, the more they can deduce about the metabolisms of microbacterial life on Europa or Mars.

In a follow-up trip a few months from now, Gómez and his team plan to study each of the three ecosystems more closely. “[In this trip], we selected these three,” Gómez said, “and we’re applying the microbiology. But in the new trip we study these three individually, and we will test new tools in the environment that could be used in space [missions]. Basically this environment is a way to test the parameters of new tools and devices, in order to study the way they would work out in space. Most of what we used in the past was first tested in very extreme environments - like this one.”