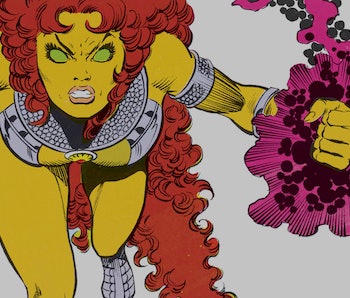 Starfire is one of the most well-known and beloved female heroes in DC comics. When a picture of the character from the set of the Teen Titans live-action TV show appeared up on social media, fans got upset. Really, really upset.

Leaked images from the Titans set showed up on Tuesday from the @badpostitans Twitter account. Robin (Brenton Thwaites), Beast Boy (Ryan Potter), and Raven (Teagan Croft) are in the leaked shots. It was Starfire, however, played by Anna Diop, who received the biggest negative reaction. Fans of the character are not holding back their disappointment of the depiction of the character.

“She looks like trash, this is worse than suicide squad levels of costume design,” said one Twitter user. “That looks awful and lazy and nothing like the character at all. What are they doing,” another user tweeted. One person did try to stay positive and tweeted, “This is not an official still for the series, it may not reveal her final look and costume. I hope it doesn’t reveal her final look. Please don’t let this be her final look.”

The choice of clothing and overall look for Anna Diop is far from the comic version. Born on the world of Tamaran, Starfire is an alien princess who has orange skin, green eyes, and long red hair. While Diop’s hair is red in the image, there are still some glaring issues with the portrayal of the comic heroine. In the show’s description of the character, she is “a no-nonsense, take-no-prisoners stranger on our world,” which doesn’t match up to her comic persona of being cheerful and endearing, although a bit naive.

Titans is still in production. Developed originally for the TNT network, the show will be part of DC’s upcoming streaming service later in 2018.

Other shows planned for the service include a resurrection of Young Justice and Metropolis, a Superman prequel.