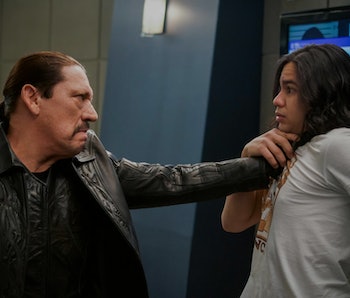 Iris West becoming her own badass Speedster now feels like a distant daydream, because The Flash is back to its somewhat frustrating Season 4 status quo in the Kevin Smith-directed “Null and Annoyed.” But one compelling plotline seemingly confirms a new theory about meta-humans in the Arrowverse while also teasing that Team Flash might be losing a member soon.

Spoilers follow for The Flash Season 4, Episode 17: “Null and Annoyed”

Danny Trejo’s Breacher returns to Earth-1 looking for Cisco’s help because his powers don’t work. After running a few tests during which Breacher is still hella scary, Caitlin diagnoses that due to Breacher’s extreme age, he’s simply running out of the energy needed to utilize his breaching powers. Caitlin notes that uses vibrational powers like this uses a lot of energy, and Cisco adds that as Breacher ages, powers are the “first thing to go” before other faculties. It isn’t explicitly stated, but the same thing will one day happen to Cisco.

But based on other evidence, this will wind up happening to just about every meta-human as they age.

Despite being one of the best episodes of Season 4, “Enter Flashtime” felt really out of place, completely unrelated to the rest of the season. We assumed it had something to do with setting up Season 5. To stop a nuclear bomb that had already gone off, Barry and the visiting Jesse Quick enter Flashtime, in which they’re moving so quickly that time stood still. This is a relatively new power in the Arrowverse, but its usage in “Enter Flashtime” winds up being that much more noteworthy when Jay Garrick is the first Speedster to fall out of it.

He simply doesn’t have the energy, because just like Breacher, he’s gotten too old. Jay even teased that he would be training up his female replacement in that episode.

It’s fitting in a superhero universe that aging heroes like Jay and Josh (Breacher’s hilarious real name) would be obsessed with legacy and passing on their responsibilities. We still have no idea who Jay’s Earth-3 replacement would be, but Breacher offers his position with the Collectors to Cisco.

Whether or not Cisco takes it, effectively leaving Team Flash to be with Gipsy, remains to be seen. But chances are we’ll see a new lineup of heroes before long as the older meta-humans age out of their powers.

For more behind-the-scenes info about “Null and Annoyed,” check out this video: