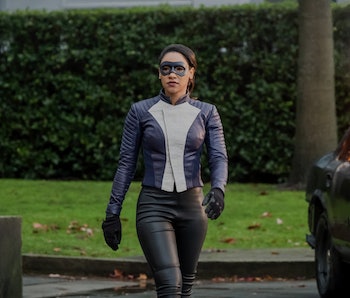 Barry and Iris take part in a classic superhero body swap story on The Flash, and it couldn’t have come at a better time. Last week’s “Enter Flashtime” saw Iris save the day with a daring plan in one of the best Flash episodes ever. This week, she’s a legit meta-human, and seeing her with purple speed is a delight.

Why can’t they both stay speedsters somehow?

Cisco calls the latest bus meta Melting Pot, because just by touching a meta, he can melt down the dark matter components in their DNA and effectively transfer their powers to the next person he touches. Inevitably, we get a depowered Barry Allen and Iris gets his speed. Within one episode, she’s every bit as skilled and successful as her husband at saving the day. She twirls her arms into cyclones, runs on water, and does just about everything except throw a bolt of lightning. Iris even does something Barry has never accomplished: create a tidal wave with her speed.

This episode is Iris’s moment to truly shine, and it’s a much-deserved high point in her character’s arc.

In many ways, this kind of story is long overdue for Iris, but “Run, Iris, Run” also represents the pinnacle of an arc almost four years in the making.

When The Flash began, Iris West functioned as something like to an emotional antagonist to Barry Allen with plotlines that often frustrated viewers. For the longest time, The Flash underutilized Iris (and actress Candice Patton) to string along an unrequited romance between her and Barry.

For most of the overly dour Season 3, Iris had a death sentence looming over her head. It make her reckless, frustrating, and the entire show a bit miserable. But these days, the Savitar threat is over and Iris has become a force unto herself, leading Team Flash since Barry disappeared. It’s her moment to shine with truly cool-looking purple speedster lightning.

Harry is hellbent on creating a Thinking Cap that might give him the same intelligence level as DeVoe, which is only a bit ironic because in the comics, it’s DeVoe who uses such a device. Cisco sensibly vocalizes some very real concerns about what this might do to Harry. How many Wellses have to become a villain and/or die before someone puts a stop to this trend?