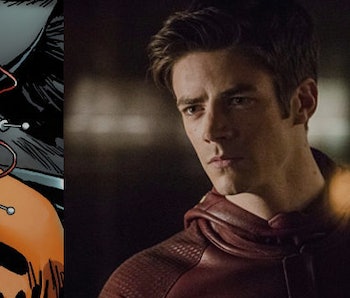 Now that Savitar’s secret identity has been revealed to Barry and the rest of the world, The Flash Season 4 will inevitably grapple with some totally new case of villainous hidden identity. Season 1 was all about that killer and impersonator in their midst, the Reverse-Flash; Season 2 focused on the confusing Zoom, Jay Garrick, Hunter Zolomon identity jumble; Season 3 has, of course, been focused on Savitar; and if we’re to believe an offhand comment from Abra Kadabra, Season 4 might be all about the mysterious “DeVoe.”

At the very least, executive producer Andrew Kreisberg has already confirmed that Season 4 won’t feature a speedster as the Big Bad. But, you might remember that in “Abra Kadabra,” the titular baddie of the week rattled off a list of the Flash’s principal enemies: Reverse-Flash, Zoom, Savitar, and DeVoe. It was almost as if the 64th-century would-be magician was reciting a list summarizing the Big Bad of each successive season, and we were inadvertently given a teaser.

The namedrop is quickly overshadowed by Abra Kadabra’s explanation of Savitar’s significance: “None of them hurt you like Savitar did.” (Let’s just ignore the fact that Reverse-Flash killed Barry’s mother and Zoom killed Barry’s father, focusing instead on Savitar murdering his girlfriend.) That fourth name, DeVoe, comes right out of DC Comics: Clifford DeVoe, aka The Thinker. His claim to fame is his “Thinking Cap,” a device he invented to increase his intelligence and even give him powers of telekinesis and mind control, all on top of him already being a genius.

The Thinker mantle is taken up by a few villainous characters in the DC universe, with only the first being an actual “DeVoe.” He went on to become a member of the Injustice Society. Much later, DeVoe would redeem himself on a mission with the Suicide Squad and even befriend a version of the Flash in his later years. More recent versions of the character portray him as a bit more sinister than his chair-smacking origins (featured above).

Another villain, Cliff Carmichael, repurposed the Thinking Cap technology to combat Firestorm, instead opting for microchips planted in his skull rather than having to wear the gaudy Cap itself. This made him into a “cyberpunk maniac” (which would be pretty cool on The Flash).

After DeVoe’s death, the Thinking Cap technology was repurposed in the creation of an A.I., which (of course) went rogue, causing all sorts of problems for Wally West’s Flash and other DC heroes at the time. Of all people, it’s Mr. Terrific that creates the A.I. (Mr. Terrific is, of course, a regular member of Team Arrow these days.) for the Justice Society’s headquarters. Only Cyborg is able to banish him back into cyberspace, and even then, he still pops up every now and then.

Season 4 of The Flash will undoubtedly adapt some or all of these versions of the character to give Barry and the rest of Team Flash a new kind of villain that they’ll have to outsmart rather than outrun, something truly novel for the “fastest man alive” who can never seem to catch up to his foes.

The Flash airs Tuesdays at 9 p.m. Eastern on The CW.