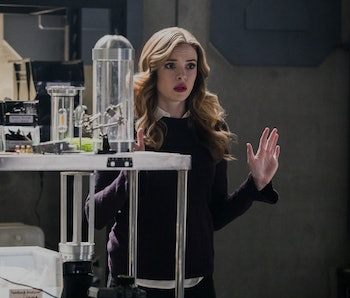 Welcome to The Flash, where Barry Allen doesn’t learn a thing and the inevitable is only delayed. In “Abra Kadabra,” the classic character from John Boome and Carmine Infantino comes to live action, played by David Dastmalchian (The Dark Knight), a 64th-century trickster hopping from Earth to parallel Earth to build a time machine back to, you name it, the future. But while Abra Kadabra is apprehended by a returning Gypsy (Jessica Camacho), it’s the damage he leaves behind that turns Caitlin Snow (Danielle Panabaker) into Killer Frost.

The Flash juggles more than it can handle in “Abra Kadabra.” Since Abra Kadabra comes from the 64th century, Barry Allen (Grant Gustin) and Joe West (Jesse L. Martin) foolishly try to squeeze spoilers about their future with Savitar, but he’s not budging. Meanwhile, Cisco (Carlos Valdes) closes the door on his relationship with Gypsy, and Caitlin and Julian (Tom Felton) resolve their tension after Caitlin’s goof with the Philosopher’s Stone. It’s a busy hour at S.T.A.R. Labs, which relegates Wally West (Keiyan Lonsdale) to the background and H.R. (Tom Cavanagh) absent, which is only going to fuel some very specific fan theories.

But the real game-changing events come after Abra Kadabra is handcuffed and the “post-credits” scene begins. Unlike most stingers, “Abra Kadabra” has an entire scene in which Caitlin — who was severely injured by Abra Kadabra, forcing Julian to perform a nasty operation — succumbs to her wounds. Julian resorts to a dangerous last resort to cure her: removing the necklace that keeps Killer Frost at bay. Like Barry Allen, Julian’s feelings for Caitlin trump logic, and there are devastating consequences. Goodbye Caitlin, hello Killer Frost.

Speaking of bad decisions, Barry Allen comes up with a terrible, awful solution to prevent Iris’s (Candace Patton) murder by Savitar: He’s going to run to the future to learn about the aftermath. If traveling to the past started this mess and changing the present ensures history, Barry’s thinks seeing future is the answer. The trailers for next week’s episode show Wally in a wheelchair, Killer Frost, and a new costume for Barry. The future looks bad, but at least Flash will look good.