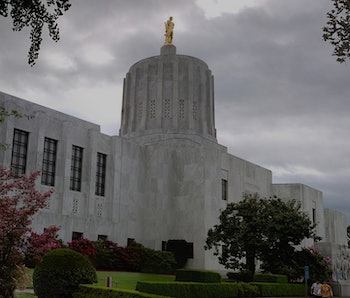 On Monday, Oregon’s Governor Kate Brown signed a net neutrality bill that ensures that the state’s government won’t do business with ISPs that engage in anti-net neutrality activity.

The bill prohibits government contracts with ISPs that dabble in paid prioritization, content blocking or other forms of online discrimination towards users — things which could be possible when the FCC’s repeal of net neutrality goes into effect later in April.

“The internet has democratized knowledge and is an invaluable tool for education. It’s so important that it remains open and accessible for everyone,” Brown said Friday, ahead of signing the bill. “In Oregon, we want to make sure that access to the internet is a level playing field, instead of exacerbating economic disparity.”

Net neutrality provisions appear to be having a Pacific Northwest moment. The bill is the second net neutrality law to pass through a state legislature, following Washington’s own passage of a bill back in February. Washington’s bill, however, has considerably more teeth as it governs all ISPs across the state to follow net neutrality practices.

Oregon’s bill also makes note that there could be blocking and throttling exceptions when it comes to matters of public safety or law enforcement. There is also a caveat that paid prioritization could occur if Oregon believes it’s justified in the interest of the public, and doesn’t inhibit the “open nature” of the rest of the state’s broadband.

The less broad legislation passed by Oregon appears to be a careful step in the right direction to enshrine net neutrality. It could also be keeping in mind that big telecom has hinted that it will pursue legal action against states and municipalities that disregard the FCC’s regulations. By making their legislation specific to state contracts, Oregon is making the case that it’s within the state’s rights to control how they conduct their business with ISPs. The ruling goes into effect January 1, 2019.