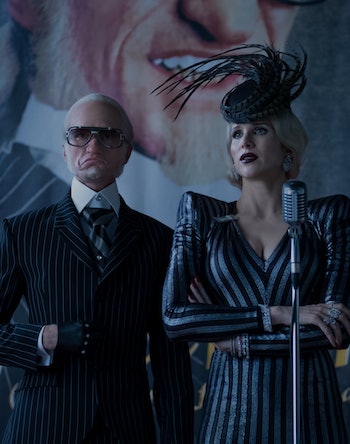 Figuring out the internal timelines of A Series of Unfortunate Events can be maddening. Omniscient narrator Lemony Snicket is also a fictional character who participated in the backstory of the series, making the chronology of the unfortunate events almost deliberately confusing. The second season just dropped last weekend and ended on a cliffhanger, but what about the time period itself? Whenabouts is all of this supposed to take place? The costume designer for the second season of the Netflix hit — Cynthia Ann Summers — thinks the key to understanding the show is something she calls “period fantasy.”

Because elaborate disguises are such a huge part of A Series of Unfortunate Events, the costumes themselves are nearly as important as the characters who wear them. From Count Olaf’s beatnik poet detective in “The Vile Village,” to the Great Gatsby-esque styles of Esme Squalor in “The Ersatz Elevator,” to retro superspy confidence of Jacques Snicket and Olivia Caliban, nothing about the series feels contemporary. But it doesn’t feel entirely real, either.

Because Summers was new to A Series of Unfortunate Events for its second season, she told Inverse that nailing down the time period was one of the first things she asked executive producer Barry Sonnenfeld.

“I was like: ‘So what period are we in? Are we moving around in periods? Are we futuristic? Are we fantasy?’” And Sonnefeld’s answer, according to Summers, guided everything she did next.

“‘The [Snicket] books are written through the memory of children’ he said. And so if you think about that when you’re a young child, and you’re remembering adults, or you’re remembering places, what you’re remembering is … pictures,” Summers explains. “And it’s not always accurate as to what you know. Instead, it is more how you remember it. So, the costumes are based on reality from a time period, but it’s through a child’s filter.”

The surreal quality of A Series of Unfortunate Events was challenging for Summers not only because of this memory perception filter but also because the setting of each adventure changed completely every two episodes, meaning a new set of costumes was suddenly required. “You have the same characters, but they’re in different towns, and different scenarios. And so you kind have to have them adapt or stand out greatly from the situation they’re in.”

What this amounts to is nothing short of visual and cinematic time travel. In “The Ersatz Elevator,” the Baudelaire orphans are stuck in a Forties-era metropolis in which every single character is wearing pinstripes, even if you don’t notice at first glance. But, just two episodes later, in “The Vile Village,” they’re basically in a Western.

“When we got to the village, we built every single costume for all the background in that one,” Summers says. “It was a little more containable in a way. And I just love, I love Westerns.”

Among all the new characters for the second season of A Series of Unfortunate Events, the heroic volunteers Jacques Snicket (Nathan Fillion) and Olivia Caliban (Sara Rue) are easily the standout favorites. Meta-fictionally, Jacques Snicket is Lemony Snicket’s brother, a fact which impacted how Summers created their looks. “Nathan Fillion and Patrick Warburton as brothers I think, is genius casting,” Summers enthuses. “I mean, in real life together, we would have some fittings with them back-to-back, and overlapping, just because they’re in similar costumes.”

But in “The Ersatz Elevator,” Jacques and Olivia rock a decidedly more Sixties or Seventies super-spy style. “We were trying to give them a look that reminded you of old spy shows,” Summers explains. “Even Indiana Jones, in a way. Sort of that utilitarian rugged, very heroic look.”

Summers also admits that Olivia’s costume in “The Ersatz Elevator” is certainly inspired by Sixties spy icon Mrs. Peel (Dame Diana Rigg) from the British spy show The Avengers. Though, unlike Sixties spies, anything that looks leather on Olivia is vegan and cruelty-free.

Summers also explains that cribbing from any decade after the Seventies for inspiration was her absolute limit. “The periods I try to sort of reference the most are the late Twenties all the way up to the Seventies,” she says. “And I try and stop there. The Eighties feel too close.”

Despite being trapped in a fictional version of the past, the period fantasy of A Series of Unfortunate Events not only makes every episode feel like an art house time-travel show, it also allows for all sorts of visual jokes. If you’re familiar with fashion guru Karl Langford, you’ll recognize at least one of Count Olaf’s disguises. And if you like old Edgar Allen Poe short stories, the absurdity of Olaf’s pseudonym — Detective Dupin — will give you laugh, if only because the “real” Dupin would never wear that.

And right there, is the microcosm for the best possible way to enjoy the series. Unlike so much other bingeable TV, not every single plot question in A Series of Unfortunate Events will be explained. Because really, that’s not the point of the show at all. Just as its historical setting is slippery and open to perception, the narrative threads of are wrapped up neatly in its intricate clothing. Everything about what people are wearing in A Series of Unfortunate Events might be a sly referential joke, but the artistry and design of this series is anything but silly or unfortunate.

Check Out More of Cynthia Summer’s work on A Series of Unfortunate Events in the slideshow below, plus some of her inspirations, too.

A Series of Unfortunate Events Season 2 is streaming now on Netflix. Season 3 is filming now.