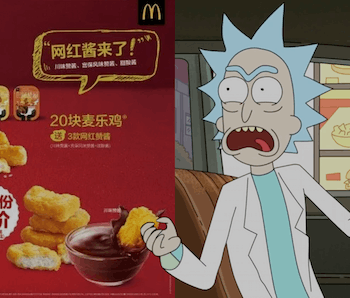 The underwhelming saga of Szechuan sauce continues, as the McDonald’s condiment, originally created for a Mulan promotional tie-in and revived after Rick and Morty made it famous, has made its way to China. And, for the most part, Chinese consumers are confused about what all the fuss was.

Quartz reports that, as of Wednesday, McDonald’s is making Szechuan sauce available in mainland China for a limited time. For 11.5 yuan (about $1.8), customers can buy a five-piece McNuggets with some Szechuan sauce.

The website for the promotion is entirely in Chinese, naturally, but it’s still worth checking out because it’s quite bonkers. Szechuan sauce is personified as a celebrity making his long-awaited return. “In the 20 years since his debut in the United States, his popularity has exploded over the past year,” the page boasts, according to a quick Google translation. Does the sauce live up to McDonald’s China’s hype, though?

“Is this really the chili sauce that the Americans go nuts about? It’s not spicy at all,” one diner wrote on Weibo, according to Quartz. Another had similar feelings, writing “don’t put your expectations too high, otherwise, you’ll be disappointed. It’s just okay.”

The unimpressed responses more or less line up with how Americans who waited in line for the sauce felt after they finally got a chance to taste it. “I thought my son was the biggest disappointment in my life then I tried McDonald’s Szechuan sauce,” one American Twitter user joked.

If anything Chinese consumers are likely more mystified by all the hype, seeing as Rick and Morty hasn’t gotten an official release in China. Plus, Szechuan sauce has literally nothing to do with China. The sauce is inspired by American-Chinese food, a typically much-sweeter cuisine than traditional Chinese food.

Szechuan sauce will be available in China through April 17.