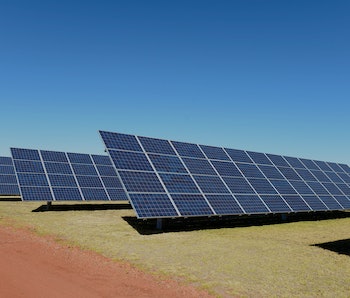 On Tuesday Saudi Arabia and Japanese conglomerate SoftBank signed a memorandum to build the world’s largest solar farm. The massive solar array could cost as much as $200 billion and would give the Middle Eastern monarchy a huge new energy source beyond its massive oil reserves.

If completed, the record-setting solar farm will be able to generate 200 gigawatts of energy. That’s more solar power than the United States and China’s combined output in 2016. The plant would also create an estimated 100,000 renewable energy jobs in a kingdom that has otherwise been tied to the fossil fuel industry. “The kingdom has great sunshine, great size of available land and great engineers, great labor, but most importantly, the best and greatest vision,” SoftBank founder Mayatoshi Son told reporters at the official announcement at a ceremony in New York.`

Currently, Tengger Desert Solar Park in China is the world’s largest solar array by quite a large margin. Nicknamed the “Great Wall of Solar,” the plant is capable of producing around 1.5 gigawatts of energy. The proposed Saudi solar grid would dwarf plant, as well as any other currently planned solar projects.

Of course, before any solar energy records are shattered, this new array needs to actually be built. There has been no word as to when construction will begin, but Son who is planning on investing as much as $25 billion in Saudi Arabia over the next four years, said the development will reach maximum capacity by 2030.

This monumental deal is part of the Saudi Vision 2030 plan that aims to reduce the kingdom’s dependency on oil and natural gas in order to diversify its economy. This effort was started by Crown Prince Mohammad Bin Salman in 2016.

If this plan comes to fruition Saudi Arabia, might change its reputation from oil monolith to solar energy pioneer in the next few years.