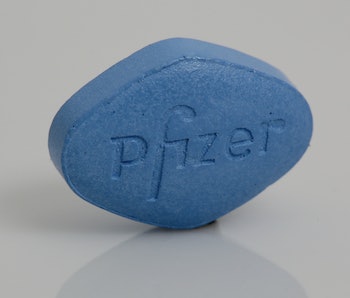 It was 1989 when Pfizer scientists Peter Dunn and Albert Wood created sildenafil, which was supposed to help with high blood pressure and angina. In the following years, clinical trials for the drug found little effect on patients’ blood pressure, but there was an interesting side effect — a “big” side effect — that ended up changing the drug industry. Dr. Nicolas Terrett, another scientist at Pfizer, came up with the trade name for the drug: Viagra.

Today marks the 20th anniversary of when the Food and Drug Administration (FDA) approved the use of Viagra to treat erectile dysfunction. That little blue pill became an immediate punchline for comedians everywhere, but it also changed how big pharma markets its products.

On Dec. 12, 1998, Pfizer made a bold move in its marketing strategy for Viagra. They hired a spokesperson for the drug that many Americans knew because he had lost the 1996 presidential election two years earlier: Senator Bob Dole.

Commercials featuring the senator focused on the issue of erectile dysfunction and didn’t mention the drug itself. However, having a former presidential candidate as part of the marketing campaign raised the bar in regards to the caliber of celebrities used for pharmaceutical marketing and also changed the conversation surrounding Viagra.

“It was the first time that a medical product made that leap into pop culture and the family living room conversation,” Lisa Stockman, a team leader at Chandler Chicco Agency which was the public relations agency behind the Viagra push, told Medical Marketing and Media in 2016. “Before, there wasn’t any acknowledgment that you’d take a medicine for something that might affect you in your prime. The thinking was ‘medicines are things that old people take.’”

Eventually, other stars and athletes endorsed the little blue pill, including MLB All-Star Rafael Palmeiro and soccer legend Pelé. Celebrities such as Charlie Sheen, James Caan, and the late Hugh Hefner also made sure to mention that they take the drug during interviews. Viagra even found its way onto the hood of a NASCAR race car driven by Mark Martin in 2001.

In the past 20 years, Pfizer made billions from the sales of Viagra. It peaked in 2008 with sales of almost $2 billion. Since then, in part because of competition from other drugs, prescriptions for the pill have shrunk. But there are still more than a million individuals who have a prescription.

Last year, Pfizer released a generic version of the blue pill, which once again upped its game in the drug world.

More like this
Mind and Body
Feb. 1, 2023
Why the future of periods could be none at all
By Elana Spivack
Mind and Body
14 hours ago
Meet the Scientists Who Want to Make Medical Devices Eork for Everyone, Finally
By Miriam Fauzia
Mind and Body
Jan. 31, 2023
Why Is My Skin Worse in Winter? 5 Conditions Dermatologists Watch out For
By The Conversation, Jeffrey Chen and Sonal Choudhary
LEARN SOMETHING NEW EVERY DAY.
Related Tags
Share: