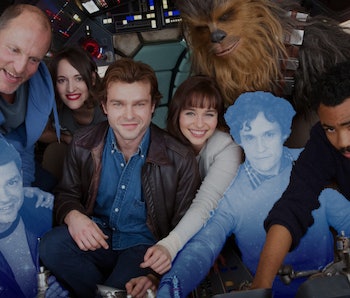 Ousted Han Solo spinoff directors, Phil Lord and Chris Miller, will still get credit for their work on the soon-to-be released film. The pair confirmed the rumors about their departure from Solo: A Star Wars Story during a festival panel on Friday.

Variety reported that Lord and Miller will still receive a credit for the upcoming spinoff. “We were really proud of the many contributions we made to that film,” Miller said at the GLAS Animation Festival in Berkeley. “In light of the creative differences, we elected to take an executive producer credit.”

The directors of 21 Jump Street and The Lego Movie lost the Han Solo directing gig last summer in a surprising move by Lucasfilm. Kathy Kennedy, head of Lucasfilm and Executive Producer of the Star Wars franchise, said a difference in “creative visions” was the reason the production company fired the director duo. In turn, Miller and Lord cited “creative differences” when they announced their departure.

The tension between Kennedy and the directors started on day one. “She didn’t even like the way they folded their socks,” a source told Variety. Last month, Kennedy confirmed there were issues with Miller and Lord’s filmmaking, mentioning how they were “just not getting it done.” She said that the directors’ joking around and improvisation slowed down the process. Lucasfilm brought in Oscar-winning director Ron Howard to replace the two directors and finish the film.

Solo: A Star Wars Story kicks off the summer blockbuster season when it releases on Memorial Day weekend. The spinoff takes place prior to the original Star Wars trilogy and follows the young smuggler as he makes his way through the dark underbelly of the galactic criminal underworld. It stars Emilia Clarke, Donald Glover, and Alden Ehrenreich, who will play the young Solo.

Tension with directors seems to be a trend for the latest Star Wars movies. Last year, Mark Hamill disagreed with The Last Jedi director Rian Johnson’s decisions for Luke Skywalker in the film. A documentary of the on-set interactions between Hamill and Johnson called The Director and the Jedi premiered at SXSW earlier this month.