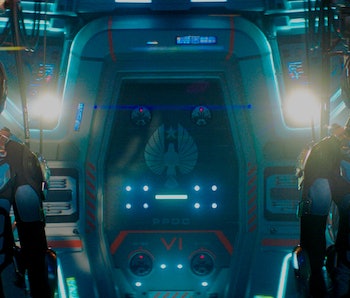 The bizarre giant robots fighting Kaiju spectacle that is Pacific Rim has always been obsessed with brains. The first movie built up a whole pseudoscience about how piloting a 288-ft mecha requires two human brains to connect and work in sync because the “neural load” is just too much, and the sequel Pacific Rim Uprising doubles down on the brain-related mad science in the most WTF scene of the whole movie.

Out Friday, Pacific Rim Uprising follows Jake Pentecost (John Boyega) as he’s thrust back into the Jaeger program to combat a new threat. Joining him on the adventure is Amara Namani (Cailee Spaeny), a young girl who builds her own Jaeger out of spare parts. This feat impresses the Pan Pacific Defense Corps enough to put her on the fast track to becoming a new pilot. Jake might ostensibly be the film’s hero and protagonist, but through Amara’s eyes we also get a look at what life is like for raw recruits of the program.

As it turns out, how new recruits first learn how to Drift is kind of disturbing. After all, it’s not something we really saw from the first movie because Raleigh Becket was a veteran that returned to the Corps, much like Jake is here.

About midway through Pacific Rim Uprising, Jake visits Amara in one of the Drift training simulation rooms where she’s seemingly trying to Drift alone — until you realize that next to her is what looks like a human brain sitting in a vat of liquid. Jake looks at it wistfully and calls the brain by some random name, saying something like, “So they still use Sally for this, eh?”

So they seemingly use a dead human’s brain as a sort of carte blanche Drift companion, all so that trainees can ease into the experience? Uprising doesn’t explain who Sally is (or was), and it’s a quick, bizarre moment that’s so easy to miss. Down the line, it’s entirely possible that we’ll learn a lot more about this “character,” but for the time being, she remains a mystery.

When we asked Pacific Rim Uprising director Steven DeKnight over Twitter on Friday about this “special partner,” he wasn’t quite ready to divulge more information just yet:

We learned in the first movie how important “Drift Compatibility” is to this whole fake Jaeger science. Raleigh Becket was one of the most talented Jaeger pilots around, but even he had difficulties connecting with Mako as co-pilots. It seems like a vulnerable mental process where one has to function perfectly in sync with their partner, so it requires an uncanny sense of mutual understanding and respect.

Idris Elba’s Stacker Pentecost — Jake’s father — is famous for saying many things. Among them: “I carry nothing into the drift, no memories, no fear, no rank.” Which is how he was able to Drift with whoever he wanted at the end of Pacific Rim. But for just about every single other person in this universe, Drifting is an incredibly difficult and sometimes traumatic process.

Using Sally allows new recruits to get a hang of how to drift before they try the real thing. Does it make sense? Sure. Is it creepy AF? Totally.

Pacific Rim Uprising is out in theaters now.