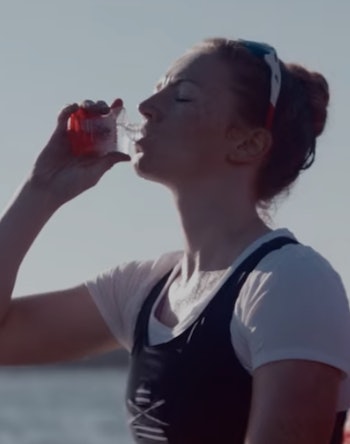 In November, the biohacking company HVMN revealed HVMN Ketone, a clear liquid served in a 2.2-fluid-ounce bottle that promises to help you “perform at your absolute best.” A result of ten years of research and $60 million in funding, the drink was created by University of Oxford scientists responding to DARPA’s 2003 call to create an efficient energy source for soldiers. Since then, it’s been shown to boost the performance of professional athletes.

I am not an elite athlete or a soldier, but I am a perpetually tired writer who doesn’t mind being a human guinea pig.

Geoff Woo, the CEO of HVMN, explained to me before I downed my shot of HVMN Ketone — which is being presold in three-packs for $99 apiece — that ketone ester constituted the “fourth macronutrient” after proteins, fats, and carbohydrates. Drinking it, he said, would provide my body with a new type of fuel — one that, for Woo, gave him the explosive energy one would feel after fasting for 10 days. Ketones in the bloodstream naturally increase when a person starves themselves of carbohydrates and sugars for several long, hard days and enters ketosis. HVMN Ketone, which has been given the thumbs-up from athletes and soldiers alike, would allow me to skip the arduous part and jump straight to peak performance.

When Woo asked me if I worked out, I explained: “I walk a lot.”

He assured me that, although the product is predominantly marketed toward elite or professional athletes, a survey showed that those people constitute only 10 percent of the people who have pre-ordered the drink, which hits shelves in April. The majority of customers, he says, are “prosumers” — weekend warriors who want to perform at their best for themselves. Then there are the people like me, who are just eager to change their diet in a new way and take advantage of the drink’s ability to put their body into fat-burning ketosis.

Drinking it, I would recall later from my notes, would make my “belly feel hot” and compel me to affirm: “I can still feel it on my tongue.”

The drink in question.

Ketone wasn’t designed for wimps like me, and pleasant flavor is far from its primary goal. The aforementioned study on athletes, published in Cell in 2016, showed that 39 high-performance professional cyclists who drank ketone ester increased their metabolic flexibility during exercise, increased muscle fat oxidation, and improved their cycling time. In December, Woo told me it was recently used by an NFL player in a professional game but declined to provide details: “I hate to be cagey, but we work with some of the most elite defense organizations and we’re working to help supply them for further missions.”

Despite HVMN’s focus on the elite, it turned my blogger’s body into a ketone-making machine.

You’re only supposed to fast for one hour before drinking HVMN Ketone. I woke up late that day and was afraid to have a real breakfast on the day my body became a ketosis experiment, so I just ate a handful of popcorn and slurped down a coffee.

Soon, I was Skyping with Woo, who was instructing me on the first step of the experiment: drawing my own blood.

Woo instructed me to prick my finger to measure my ketone and glucose levels before drinking the ester. My bad diet gave the impression that I actually had the diet of a fit person who didn’t eat free office snacks for breakfast: a baseline glucose level of 92 milligrams per deciliter and a ketone level of 0.5 millimoles per liter.

“The 0.6 ketones is quite interesting,” Woo noted. “Usually, I would expect someone to be at 0.1 or 0.2. Because if you’re eating a normal diet, you generate very little ketones.” He offered his own measurements for comparison: His ketone levels are typically between 0.6 to 1.0 millimoles per liter after 24 hours of fasting. After three days, that number grows to 2.5, and after seven days, it goes up to 5.4.

He accepted my explanation that I’d had toast (I was embarrassed about the popcorn) and nothing more. Because I had barely eaten after waking up, I had already depleted my storage of carbohydrates and glucose, and my body was already at the starting line of “nutritional ketosis.” This was a good start.

Soon it was time to drink the ketone. Woo said it would taste “pretty palatable,” but he said some people describe the taste of it as “burned tequila.”

Fittingly, he recommended I shoot the 120-calorie ester “just like a shot.” I went to the University of California, Santa Barbara (go Gauchos!), so I’m very good at that. As soon as I drank it, I was congratulated accordingly.

The most accurate way I can describe HVMN Ketone’s flavor is that it tastes the way it smells: The first wave hits with cough syrup-like sweetness, then the second follows up with the essence of bitter alcohol. Much like Fireball, it’s not great — but if it delivers on its promise, it’ll do.

Thirty minutes after taking the shot, I measured my ketone levels again: My glucose level had dropped to 88 milligrams per deciliter and my ketone level jumped to 4.8 millimoles per liter.

Another half-hour later, my body experienced another big change: My glucose level dropped to 66, and my ketones rose to 5.1. Suddenly my body was in a “deep state of ketosis,” as Woo explained. Like someone who had fasted for a week, my body was using ketones of fuel instead of releasing glucose stored in fat. My ketosis level was the same as that of a person who had fasted for a week. It even surpassed someone who was on the keto diet — and I never even had to give up carbs.

I felt good. My brain and body felt more alert, and I suddenly thought that taking a run around the block was the right thing to do. I didn’t feel jittery like I usually do after drinking coffee. I wondered why walking was my exercise of choice — working out before work couldn’t be that hard. How expensive were krav maga classes? The only thing I was suspicious about was my shaky hands.

I first blamed the shakes on the fact that I hadn’t eaten anything real in hours. So, I ate four meatballs and three cookies (the Inverse office was having a cookie contest). Just like that, I had become a trash person once again.

The effect was almost immediate. In my notes, I wrote (with increasingly bad penmanship): “I ate: tired again.” I emailed Woo about how shitty I felt.

“I would venture that the cookies spiking and then crashing your glucose and insulin would account for the crash,” he wrote back. I nodded silently on my side of the screen: My time among the physical elite was over.

It’s hard to say whether or not drinking HVMN Ketone is exactly good for you. The study in Cell highlights that drinking it offers “advantageous aspects to starvation ketosis” by allowing a person to metabolize energy as if they were in a fasted state while not actually fasting. The whole idea behind ketosis is that the body is better at using fuel when it’s starving; but the body, as we know, can’t exist without fuel. Ketone ester, in theory, seems to fuel the body’s ability to use its existing fuel more effectively.

However, scientists still don’t have a clear understanding of the long-term effects of adding exogenous ketones on top of the ketones the body makes naturally. And while other publications have called HVMN Ketone things like the “holy grail of dieting,” Woo says that’s an overstatement: More studies and bigger studies are needed to tell whether or not ketosis if an effective way to lose weight for all people.

For me, if I had an extra $99 to splurge on Ketone, I’d probably try it again. Time will say whether it will eventually transform into a mass-market item like Redbull or 5-hour Energy — despite the intention of its design, people are always looking for a cheat-code to energy, whether or not it’s healthy for you.

If you do drink Ketone, pairing it with exercise and a healthy diet is the right way to go. But don’t expect the chance for another few months: HVMN has a target delivery date of April 2018.