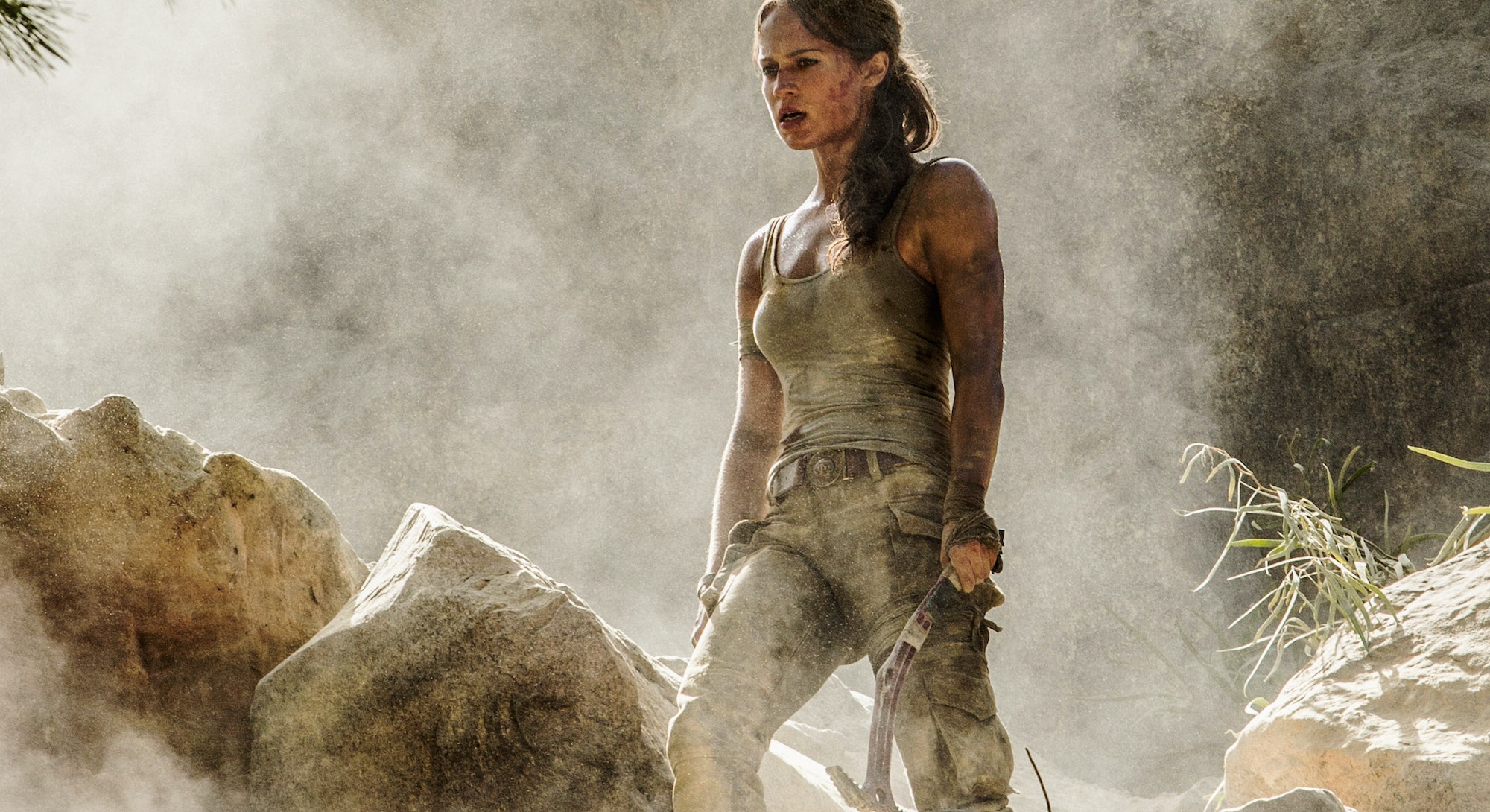 Here’s a challenge: Name one truly memorable movie based on an actual video game. You can’t, right? That’s because the “video game curse” is real. But can the new Tomb Raider do what Lara Croft does best and break a spell that’s cursed pop culture for decades? By ignoring the curse entirely and remaking the famed PlayStation avatar from scratch, there’s at least a chance.

Aside from Wreck-It Ralph, The Last Starfighter, and Tron, film adaptations of pre-existing video games seem destined to (and often do) fail, with poor reviews and marginally better box office returns. The most recent high-profile video game film, 2016’s Assassin’s Creed, has just 18 percent on Rotten Tomatoes. But it also grossed $240.7 million worldwide, profiting from its reported $120 million budget. So sure, video game movies make money, tapping into an established fan base for profit in the short-term. But to have legacy, they need something more.

Tomb Raider could be more, with a realistic Lara Croft, played by Alicia Vikander. Out this weekend, Tomb Raider tries valiantly to break the curse. Director Roar Uthaug’s strategy for beating it, he says, was to ignore it entirely.

“Yeah, of course I’ve heard about the curse,” Uthaug tells Inverse over the phone. “I didn’t think much about it when we were making this movie. We just focused on making the best possible Tomb Raider movie we possibly could.”

In the fifteen years since Angelina Jolie last played Lara Croft, in 2003’s Lara Croft: Tomb Raider — The Cradle of Life, the gaming medium has exploded into one of the highest-grossing media industries on Earth. The breadth gaming has grown means there’s a diversity of stories, with newer, nuanced characters outside the standard-issue superheroes and super soldiers, like Clementine in The Walking Dead, or Max and Chloe from Life Is Strange. But video game movies haven’t kept up to this evolution.

To date, the most successful video game movie franchise is Resident Evil, a six-film series that’s grossed over $1.23 billion worldwide but has the average Rotten Tomatoes score of 27 percent. Though actress Milla Jovovich has lead the series for 14 years, her protagonist “Alice” is barely a household name.

In bringing Lara Croft back to film, Uthaug knew the old mold of an action heroine wasn’t enough in 2018. So instead of the antiquated “Old Lara,” a relic of nineties pop culture, Uthaug modeled his heroine after the new Lara Croft introduced in the more contemporary Tomb Raider, a 2013 title that rebooted the whole series.

“[In] making this movie, we focused on making a new origin story for the big screen. When I [was] approached about this movie, I got excited because I loved what [Crystal Dynamics] did to Lara Croft,” Uthaug said. “That was the basis when we started talking about the movie. I played a lot of it and watched cutscenes from YouTube. That was the introduction.”

Released on the Xbox 360, PlayStation 3, and later ported to PC and newer consoles, 2013’s Tomb Raider reinvented the video game sex symbol into a gritter heroine for a new generation. Developed by Crystal Dynamics and published by Square Enix, the new game starred a younger, bookish Lara Croft who must survive a deserted island’s hazardous elements — and a fully-armed paramilitary force — to solve an ancient mystery. Gone were the crop tops and thigh holsters, in were rugged cargo pants and a makeshift archery bow.

The first images that introduced gamers to this “New Lara” surfaced in 2010, in a Game Informer cover story where director Brian Horton detailed the changes.”There is a different tone we are going for across the board,” Horton explained. “Lara Croft as a sex object isn’t our goal. No unlockable bikinis.”

Noah Hughes, the game’s director, told The Telegraph in 2013: “Once you commit to the idea of telling Lara’s origin story in the context of a survival situation, everything starts to click…how can we take this young, naïve, archaeologist, and build her into a Tomb Raider in a way that the player gets to experience too? It would be an empowering journey.”

That’s what Uthaug thought, too. In contrast to Angelina Jolie’s version, Vikander’s Lara Croft is infinitely more vulnerable and driven by emotion. “She’s on the streets of London trying to make ends meet,” Uthaug explains, a decision made to emphasize Lara’s eagerness to “put everything that’s happened” with her missing father behind her. “That thread puts her out on this big adventure.”

“She gets knocked down, she stumbles, she falls. But she keeps fighting.” - Roar Uthaug, director of Tomb Raider

But perhaps the biggest element that defines Uthaug’s reimagined Lara is her father, Richard Croft, played by Dominic West. In the film, Lara is fueled byher father’s disappearance and her determination to reunite with him, however slim the chances. “You need an emotional core of the movie to pull the audience in, to root for and care for Lara,” argues Uthaug.

Though the universes couldn’t be more different, crafting an emotional core has been the same strategy that’s allowed insanely successful Marvel to win over moviegoers for the last ten years. As video game films flounder, comic book movies have soared with sharp, well-defined characters with emotional resonance. Black Panther, the latest film in the Marvel canon, just passed the billion dollar box office milestone five weeks after its premiere.

A grounded Lara Croft, Uthaug hopes, could help reshape video game movies to come. “I think that’s what every big action movie like this needs,” he says. “She gets knocked down, she stumbles, she falls. But she keeps fighting.”

To its credit, Tomb Raider succeeds in remaking Lara Croft. Reviews — 49 percent on Rotten Tomatoes, so, still “rotten” — have at least commended Vikander’s character. “As Lara, Vikander is terrific,” writes Vox critic Alissa Wilkinson. “By turns vulnerable and strong, brave and frightened, impish and determined, she ably fits the evolved character. The Lara of the rebooted games must gain confidence and push through her own pain in order to become a badass; Vikander embodies just that sort of character believably.”

Uthaug reasons that “the survivor aspect” of the game could enable Lara Croft to become the larger than life heroine she once was. “Each ordeal she goes through, she gets strong and more capable and becomes the Tomb Raider she was meant to be. She’s ready for what the world might throw her. Other people can worry about the curse.”

Tomb Raider is out in wide release now.