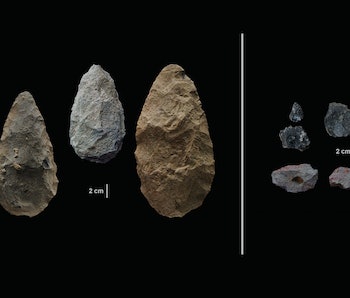 About 320,000 ago, life for ancient humans living in Kenya’s Olorgesailie Basin was especially rough. At the time, the climate there fluctuated between extreme moist and arid states, earthquakes regularly rocked the region, and larger mammals faced extinction and were replaced by smaller mammals. Resources were limited, but as the authors of a trio of new studies published in Science recently discovered, the people living there were remarkably well equipped to survive.

According to the three new studies, published Thursday, humans in Olorgesailie were armed not with primitive large stone hand-axes but an array of sophisticated tools made of “imported” materials. The weird thing is that the tools they found weren’t made of volcanic basalt, like the axes, but of semi-precious stones — like gleaming black obsidian.

Obsidian isn’t found in the basin, which suggests that the ancient humans who made these tools had to travel up to 55 miles away and bring back the rock in chunks before making the tools. That was far more than scientists had previously expected this society to be capable of, so this find has forced the researchers from the Smithsonian Museum of Natural History to revise the story of ancient humans in this area.

“This change to a very sophisticated set of behaviors that involved greater mental abilities and more complex social lives may have been the leading edge that distinguished our lineage from other early humans,” explained Rick Potts, director of the National Museum of Natural History’s Human Origins Program in a statement released Thursday.

The conclusion of all three papers is that these surprisingly advanced behaviors and technologies were adopted at or near the time that Homo sapiens is thought to have originated, suggesting that our ancient ancestors became a lot more sophisticated far earlier than we gave them credit for. The new chronology — determined by dating the newly discovered tools — sets back what other researchers thought was the transition to more sophistic technology by at least 20,000 years.

Potts is the lead author on the paper that focuses on the adaptive challenges early humans were undoing during this phase of evolution. In 2002, Potts and the scientists behind the other two papers discovered carefully shaped obsidian tools in Olorgesailie and showed through isotopic dating that the tools were 320,000 to 305,000 years old. They immediately realized these tools were more specialized devices than the all-purpose hand-axes discovered in the past: some were clearly shaped to be scrapers, and others could be attached to a shaft, signifying a transition from scavenging to hunting.

The fact that these tools were made of obsidian from other locations led the scientists to believe the humans who made them had to interact with different groups of ancient humans far away, thus igniting the first stages of social networking.

This surprisingly early leap in technological innovation and social interaction also seems to have coincided with the rise of using color pigments and trading with distant groups. At the same sites where the tools were found, the researchers also came across manganese and ocher — brightly colored red and black rocks that were drilled into to extract pigments. In another of the studies, the authors argue that this discovery likely indicates the first evidence of the extraction of pigments and a high degree of social organization.

“We don’t know what the coloring was used on, but coloring is often taken by archeologists as the root of complex symbolic communications,” says Potts. “Just as color is used today in clothing or flags to express identity, these pigments may have helped people communicate membership in alliances and maintain ties with distant groups.”

All of these developments, Potts and his team argue, were likely motivated by the great environmental pressures that people in the area felt at the time. It’s the chaotic changes in the climate and in the surrounding wildlife, they reason, that likely spurred novel tool-making and the impetus to travel greater distances for resources. An unforgiving environment meant humans needed to work harder and smarter to survive, a catalyst that contributed — and still contributes — to the process of human evolution.