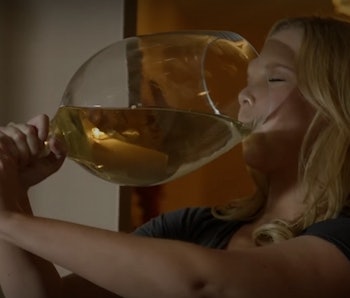 This Saturday, Saint Patrick’s Day revelers around the world will celebrate the Irish icon by crushing about 13 million pints of Guinness. That’s a lot of booze in a short period of time, but such feats of binge drinking are commonplace to American drinkers, according to a new report released by the United States Centers for Disease Control and Prevention on Friday. The number of drinks that U.S. adults consume each year while binge drinking, it reveals, is in the billions.

In the study, published in the American Journal of Preventive Medicine, the CDC researchers reveal that in 2015, U.S. adults drank over 17 billion drinks while binge drinking. Per person, that comes out to 470 binge drinks a year; by the researchers’ estimates, that’s about an average of seven drinks per binge drinking session. They pulled their data from about 408,800 people surveyed through the Behavioral Risk Factor Surveillance System about their health and risky behavior.

According to the CDC guidelines for safe drinking habits, binge drinking for men constitutes consuming five or more standard drinks in two hours, and for women it constitutes drinking four or more in the same period. A standard drink, in the U.S., is 14 grams of alcohol — about what you’d find in a 12-ounce can of beer, a five-ounce glass of wine, or in a shot of 40 percent liquor.

The people who consumed the most binge drinks were those whose incomes were less than $25,000 a year and those with less than a high school education.

While the occasional binge drinking session may seem commonplace for many American adults, the consequences are nothing to shrug off. The negative short-term effects, as most drinkers know, are dangerous driving, risky sexual behavior, and violent behavior. Long-term binge drinking can lead to an increased risk of cancer, heart disease, and liver failure.

“This study shows that binge drinkers are consuming a huge number of drinks per year, greatly increasing their chances of harming themselves and others,” said study co-author Dr. Robert Brewer, the lead researcher in CDC’s alcohol program, in a statement. “The findings also show the importance of taking a comprehensive approach to prevent binge drinking, focusing on reducing both the number of times people binge drink and the amount they drink when they binge.”