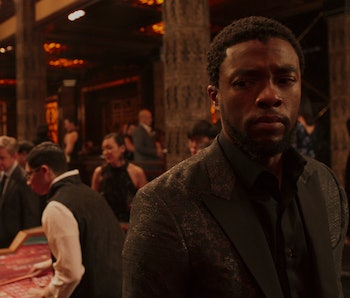 White nationalists are attempting to appropriate the afrofuturist film Black Panther by asserting that the film is a tribute to the isolationist, ethno-centric political ideology they espouse. Happy Thursday!

According to The Washington Post, researchers at the New York-based think tank Data & Society found that over the past nine months, white nationalists mounted a social media campaign to claim Wakanda. With a wide range of memes, YouTube videos, and hashtags, white nationalists have argued that the fictional nation is a Trumpian utopia. In Wakanda, white nationalists purport to see the idealized version of a culturally homogenous ethno-state, which is exactly what they want — but, like, with white people.

Attempts to co-opt the film started in June 2017, when a meme called “Black Panther is Alt-Right,” starting making the rounds on Twitter; the meme includes a checklist of supposedly shared traits between a white nationalist fever dream and the nation of Wakanda. A quick Google search yields a litany of articles and videos making similar comparisons.

Despite the white nationalists’ strong convictions, many have argued that this is a ridiculous misreading of the film.

“The claim that the Black Panther hero, King T’Challa, represents the core beliefs of the alt right — isolationism, anti-globalism and racial homogeneity — is preposterous,” Malkia Cyril, executive director of the nonprofit Center for Media Justice told The Washington Post. “[It] can only be asserted by white supremacists or people who really don’t understand the relationship between Africans in the diaspora and on the continent.”

Cyril is right; there a number of fundamental differences between the political ideology espoused by Wakandans and that peddled by white nationalists. In Wakanda, isolationism is more of a preemptive measure, a failsafe to ensure that their superior technology doesn’t fall into the wrong hands and that their nation avoids the aggressive colonization that beset the rest of Africa. (And yes, Ben Shapiro, I know that Wakanda isn’t real.)

It’s also worth noting that by the end of the film, Wakandan foreign policy has completely flipped; the movie concludes with a Wakanda ready to enter the global community in service of protecting oppressed people around the world.

As with all online white nationalist activity, it’s really hard to determine how serious the white nationalists are about their Black Panther reclamation project. Perhaps they are just trolling, knowing that because of the historically diverse representation in Blank Panther (and its massive popularity), many people will jump to the film’s defense.

Still, it’s rather jarring to see white nationalists exalting a movie that has been simultaneously praised as a paean to black excellence. But there may not be a better expression of the colonizer mentality that led to the very creation of Wakanda: If something is successful, it belongs to us.

More like this
Gaming
8.2.2022 5:27 PM
"Woke" GTA 6 is the best thing that could happen to the franchise
By Willa Rowe
Entertainment
8.11.2022 1:00 PM
Our Flag Means Death fans are redefining historical fiction
By Dais Johnston
Culture
4 hours ago
25 years ago, the worst sci-fi TV pilot ever launched a pop culture phenomenon
By Jon O'Brien
Related Tags
Share: