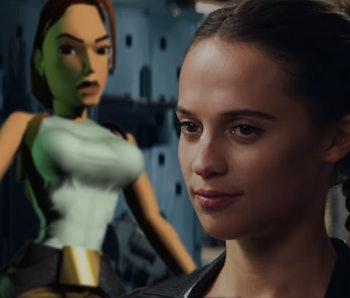 Lara Croft is back. In the new Tomb Raider movie starring Alicia Vikander, the iconic video game heroine returns in a grittier realization than the last time Lara Croft kicked butt on the big screen. However, in a mid-credits scene (a shot of which was included in the trailers), there are hints of the old Lara Croft, who could return in a delightfully nostalgic old-school style sequel.

Spoilers for Tomb Raider ahead.

At the end of the film, Lara Croft discovers that the group Trinity she fought on Yamatai was actually owned by her late father’s massive corporate empire, Croft Holdings. Unfortunately, before Lara Croft realized this fact, she had just signed away ownership of the company to a close family friend, Ana (Kristin Scott Thomas), whose motives were more sinister than she thought.

To make up for her mistake, the now battle-hardened Lara Croft decides to take action. Returning to the London pawn shop where she sold a family heirloom (to pay her way to Yamatai earlier in the film), Lara sees the shop owners’ illegal wares of firearms. (Access to firearms for civilians is a lot tighter in the United Kingdom than in the U.S.) Suddenly, this gritty survival story goes old school, with guns upon guns lit by illuminated, stainless steel display cases.

Dazzled by the armory in front of her, Lara Croft grabs two pistols where she quips, “I’ll take two.” If you still remember 1996, you’ll recognize what Lara Croft in the old Tomb Raider games used to look like: A badass adventurer armed with two guns holstered at her thighs.

Lara doesn’t “suit up” before it cuts to credits. However, with Ana having taken over her beloved father’s company, it’s very likely the new Lara Croft is battle-ready to go up against and take back her father’s legacy.

In an interview with Inverse, director Roar Uthaug explained that his film is meant to be an “origin story” for the ol’ Tomb Raider pop culture remembers from when The West Wing was on the air.

“We’re making it a new origin story for the big screen,” he said, “We wanted [to use] the survivor aspect of the new games, and through that see how she goes through the ordeal before she becomes the Tomb Raider she’s meant to be.”

While the moment Lara gets her guns is in the trailer, the entire scene isn’t. So for those who want the full experience can relax as the credits roll.