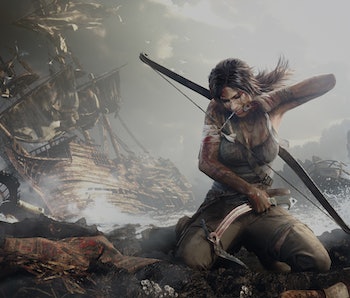 Few pop culture figures defined the nineties as Lara Croft. Now, the Tomb Raider is back in a blockbuster reboot of, well, Tomb Raider, starring Alicia Vikander (The Man from U.N.C.L.E.). But for those who haven’t thought of Tomb Raider since Friends was on the air, you may be surprised to see how different the movie looks from the classic PlayStation titles. That’s because the new film is based significantly after the reboot game Tomb Raider from 2013.

Hitting theaters March 16, the new film from director Roar Uthaug has several big elements straight from the 2013 reboot developed by Crystal Dynamics and published by Square Enix. In that game, Lara Croft was reimagined into a younger academic who is pushed to survive on a remote island in Japan and investigates a mystery unsolved by her late father. Meanwhile, bad guys named Trinity are after the same thing, so of of course there’s fighting and shooting.

Still, the new games were careful to present a new Lara who doesn’t plunder foreign burial grounds while racking up a body count. Here are all the Easter eggs from the new games that appear in the reboot film.

1. Pretty much the entire story

In the reboot Tomb Raider game, Lara Croft is a young, twenty-something academic and archeologist who is trying to prove her late father’s theories about the island of Yamatai — a real place somewhere in Japan whose exact location remains unknown.

That basic premise is also the template for the film, except for Lara Croft’s archaeology degree. In the film, Croft is a rebellious heiress who avoids the Croft fortune and empire, her way of grieving for her missing father. But a leftover thread left behind by dear old dad sends Lara out seeking Yamatai and the secrets the island holds.

2. Everything about Lara Croft

When it comes to looking the part, Alicia Vikander practically stepped right out of the games, down to her costuming and her new arsenal.

The “old” Lara Croft had handguns. But in the new games, Croft carried a makeshift archery bow (crafted from materials players have to scavenge) and a pickaxe, which players learned had like a dozen different uses, from climbing up walls, to forcing doors open, to brutally eliminating enemies. New Lara also wasn’t afraid to carry firepower, but those were always picked up from dead enemies, and ammo was always in scarce supply.

3. The Devil’s Sea and Yamatai

In the film, Lara Croft and Lu Ren (Daniel Wu, Into the Badlands) are shipwrecked on the haunted island of Yamatai when they pass through the Devil’s Sea. The film’s setting is lifted directly from the games, though inexplicably this so-called remote island had a lot of old World War II-era buildings and vehicles lying around.

The new film doesn’t have as many derelict structures lying around. But a Japanese island with a supernatural presence? That’s Tomb Raider for sure.

A significant moment from the 2013 game was when Lara had to kill for the first time. Unlike the old Lara, who dodged and shot guns like a pro, the new Lara was inexperienced as a young woman who never thought she’d ever be in life or death situations. Thus, Lara’s first kill is a big deal, and it’s played out with the same emotional weight in the film. Unfortunately, also like the games, it’s quickly glossed over as Lara starts taking out dudes with that nifty bow.

Some of the film’s most tense set pieces, where Lara barely survives a rushing waterfall and jumps out of an empty plane, are also from the game.

Ultimately, both reboots tell Lara’s “origin” into the Tomb Raider. In an interview with Inverse, Uthaug said he was fascinated with the 2013 game as a starting point for Lara to earn her way into being the Tomb Raider everyone remembers.

“We’re making it a new origin story for the big screen,” Uthaug told Inverse. “We wanted the survivor aspect of the new games [to] see how she goes through the ordeal before she becomes the Tomb Raider she’s meant to be.”

Creative director of 2013’s Tomb Raider told The Guardian about taking Lara to her beginnings. “We needed to take Lara from the beginning of her story, with big ambitions but without experience, and put her in a situation where she would be forced to grow,” Hughes said. “The survival theme really became the crucible in which we would forge the heroine.”

Of course, minor spoilers (but this was in the trailer anyway), but the mid-credits scene has Vikander strapping two guns like her old gaming ancestor. “I’ll take two,’ she smirks. As moviegoers will see, she definitely earns it.