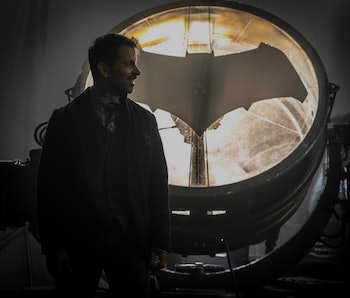 Fans of the DC cinematic universe will be disappointed to learn that there isn’t a “Director’s Commentary” track, with either Zack Snyder or Joss Whedon, on the Blu-ray release of Justice League. There are, however, other neat special features that peek behind the curtain of how the Justice League came to be on the big screen.

On Tuesday, Justice League was released on Blu-ray and DVD, just a few weeks after the film’s Digital HD release. Many of the special features are the same, including the talked-about deleted scene featuring Superman’s iconic black suit. But for those hoping to hear from director Zack Snyder, or even Joss Whedon, who took over directing duties during reshoots, are out of luck. Neither Snyder nor Whedon have a director’s commentary track on the Blu-ray.

That’s not to say Snyder doesn’t show up. Though he also doesn’t appear as a talking head, behind the scenes footage of Zack Snyder are included in the special features, particularly in the “Scene Studies” features, in which the making of specific scenes from the film are explored in-depth.

The cast also speak highly of Snyder. Henry Cavill, who stars as Superman, says Snyder has “got such an incredible brain for the visual” and that he has “everything planned out in his head before we get there.”

Ben Affleck, who co-stars as Bruce Wayne/Batman, also compliments Snyder’s on-set brain. “He’s got a lot of energy and he’s got a lot of enthusiasm,” Affleck says in the “Heroes Park” segment. “It’s hard to try to hold these things in your imagination when virtually everything is going to be put in by computer.”

Whedon, meanwhile, is nowhere to be found or heard from. When Snyder exited the film due to family reasons, the Buffy creator stepped in during reshoots. But the Justice League bonus features are quite polished, in that they don’t explore the extent Whedon was involved.

At least the comics get their own focus. In “Road to Justice,” big name creators like Jim Lee, Dan DiDio, Grant Morrison, Geoff Johns, and Bruce Timm (producer of Batman: The Animated Series) all talk about the mythology of the DC heroes in a neat 12-minute feature that hardcore fans will enjoy.