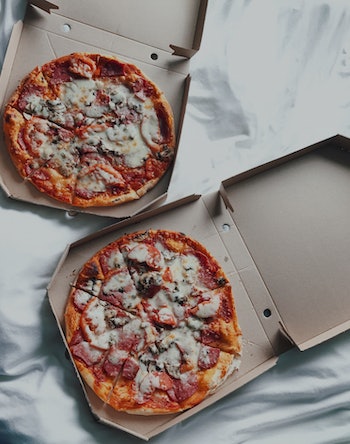 A fleet of Ford self-driving cars started delivering pizzas this week in Miami, which should be great news for pizza-lovers (if not delivery drivers). It’s a pioneering technology that could change the future of pizza, if you squint hard enough.

“What we learn from this customer experience research will be applied to the design of our purpose-built self-driving vehicle that we plan to launch in 2021 to support the expansion of our service,” writes Ford executive Sherif Marakby in a blog post published this week that announced the experiment.

But the nascent endeavor has identified an obstacle already deeply familiar to anybody who’s ever done the job: Parking.

Finding a parking spot in the city when you have half-a-dozen piping hot pepperoni pies in the back seat is a no-good sitch, but a human pizza delivery driver with enough experience won’t have any qualms about putting on the flashers and double-parking. It’s an illegal maneuver, but generally a quick one that goes unpunished. Autonomous cars won’t do that, Ford learned.

Future pizza sounds cool, but if you live in a city, your future pizza might arrive cold. Here’s why:

Right now in Miami, autonomous delivery vehicles require the customer to come out to the street to collect their pizza. Otherwise, a 30-minutes-or-less guarantee might not be applicable to a self-driving pizza delivery.

In suburban communities, asking customers to come out to the street isn’t too big of a problem. Ford previously deployed an autonomous pizza delivery vehicle in Ann Arbor, Michigan, and the carmaker found that many customers retrieved their pizza barefoot, or in socks. Because they usually only had to walk to their driveway, or the front of their lawn, customers didn’t necessarily feel the need to put on shoes.

But compared to deploying self-driving cars in the city, the Ann Arbor program was relatively simple. “What we are doing in Miami is really focusing on a similar experience but in an urban market,” Communications Manager for Autonomous and Electric Vehicles Alan Hall says.

Cities pose particular challenges for self-driving delivery vehicles. For example, people might be more wary of walking along city streets without foot protection. That means the cars would need to park as close to the customer as possible, or risk alienating them by eliminating one of the main conveniences of delivery pizza: Namely, the fact that you don’t have to move very much in order to enjoy delicious pizza. Anyone who’s lived in an urban center knows that good parking is hard to find.

“We expect that often times, there’s not going to be a parking space right where the front of a building is, so the car will pull up to the closest available parking spot probably somewhere along the block,” Hall says. Adding in extra steps to the delivery process could really interfere with the customer’s experience.

Obviously, it’s a learning curve, and every time the autonomous vehicle is forced to park far from the preferred destination it will help Ford refine the service.

“We’re going to mark that differential of where the navigation tells us to go, and where we actually end up parking,” Hall says. “That kind of data will allow us to go back to the city and navigation provider and start to work out these challenges.”

Autonomous vehicles are ready to deliver your pizza; but you might have to wait while they find a parking space.