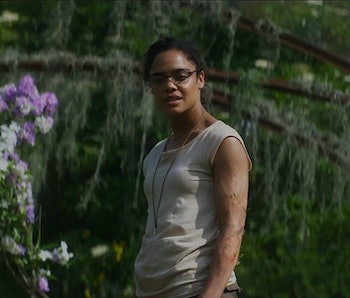 Inspired by Jeff VanderMeer’s Southern Reach trilogy, the new science fiction thriller Annihilation weaves actual scientific concepts into the plot, then turns the dial up to holy shit. Its interpretation of real-life genetic research makes for a fascinating thought experiment, even if the outcome isn’t exactly up to code.

Major spoilers below for Alex Garland’s Annihilation below.

As a team of scientists explores Area X — the mysterious, bordered environmental anomaly at the center of the film — they begin to encounter weird lifeforms with mutated genomes, like a crocodile with shark teeth. Among the creatures are topiary-like plant structures shaped like human bodies. Josie Radek, the expedition’s resident astrophysicist (played by Tessa Thompson) hypothesizes that the plants have a human form because they contain human Hox genes.

Hox genes are an actual family of genes that influence the body forms of animals, whether humans or worms. The border around Area X, says Radek, “is a prism but it refracts everything” — including the genetic information of the entities trapped within the swamp, causing plants to take on human-like qualities.

While Hox genes are an alluring concept for a science fiction movie, Annihilation director Alex Garland takes many liberties with how they actually work. Hox genes are a family of genes that specify whether segments of an embryo develop into a part of a head, thorax, or abdomen. They also specify where on the body that segment will grow and establish its position on the organism’s anterior-posterior axis — that is, its organization from head to toe.

While all animals have genes from this family, they don’t have the same number: Humans have 39 Hox genes located in four clusters on different chromosomes, while chickens express 23 Hox genes during limb development.

None, however, are found in plants, which makes it increasingly unlikely that even the maddest of scientists could ever splice animal Hox genes into a plant genome to coerce the plant into taking on a human-like organization.

However, the Hox gene family is part of an even larger family called the homeobox genes, which are found in almost all eukaryotes — including at least 10 classes of plants. While Hox genes specifically determine a body’s anterior-posterior shape and where body parts grow, homeobox genes encode other transcription factors that also influence an organism’s shape and the complexity of its form.

Even if Hox genes were somehow incorporated into a plant genome, nobody can say what effect they’d have on the organization of the plant. While scientists believe evolutionary horizontal gene transfer allowed humans to share genetic information with plants in the past, that doesn’t mean that plants would, or even could, grow to share our shape if they were pumped with human DNA.

In the world of Annihilation, of course, that doesn’t matter — what’s spectacular, and terrifying, about Area X is the absolute perversion of what the characters had presumed to be true. That includes their own mental stability — and science as a whole.