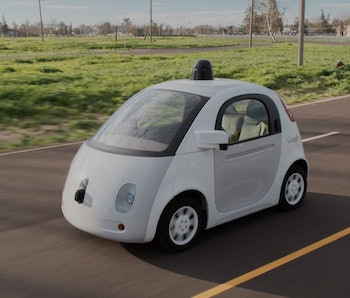 California’s Office of Administrative Law has approved regulations to allow the driverless testing and public use of autonomous vehicles. Before this, self-driving cars had to be piloted with an approved driver at the wheel, just in case anything were to go awry.

On Monday, California’s Department of Motor Vehicles announced these major changes to the rules surrounding self-driving cars, but there’s a catch. All vehicles planning on hitting the road without a driver must be hacker-proof.

“Certify the vehicle meets current industry standards to help defend against, detect and respond to cyber-attacks, unauthorized intrusions or false vehicle control commands,” stated the California DMV’s press release, along with many other requirements.

While companies like Tesla, Uber, and Lyft have been pushing heavily to bring completely autonomous vehicles into the mainstream, there has been a fair share of skepticism regarding the technology.

In February 2017, a psychologists at University of Michigan surveyed 519 people about the cyber-security of self-driving cars. A third of respondents were found to be extremely concerned about the potential of a hacker taking over the car and using it as a weapon.

This sentiment is further supported by the head of the Radionavigation Laboratory at the University of Texas, Todd Humphreys, who has said hackers have the ability to send bad data to cars and interrupt the flow of real data coming from GPS satellites.

It seems like California’s DMV included this peculiar detail in its announcement to offset these fears. But because this technology is so new, there isn’t a full understanding of how exactly hackers could go about remotely tampering with autonomous vehicles.

An MIT Technology Review article compared the advent of autonomous vehicles to the first e-commerce platforms in the Nineties. At first there seemed to be no security risks because the technology was so new. But soon enough companies were spending millions if not billions of dollars to defend against hackers that are constantly refining their tactics.

While we might be in a similar initial stage of driverless car technology, it’s reassuring that administrative organizations are taking preemptive steps to make sure this new advancement isn’t used in a harmful way.

This is a big step in ushering an era where self-driving cars are commonplace, while not downplaying their potential risks.

More like this
Gear
Jan. 27, 2023
Audi’s EV concept uses mixed reality to make your adventures easier
By Jackson Chen
Gear
Jan. 27, 2023
How to lock down your iCloud with Apple's Advanced Data Protection
By Alyson Velati
Innovation
Jan. 25, 2023
Starship orbital flight: SpaceX successfully loaded the rocket with over 10 million pounds of propellant
By Mike Brown and Molly Glick
LEARN SOMETHING NEW EVERY DAY.
Share: