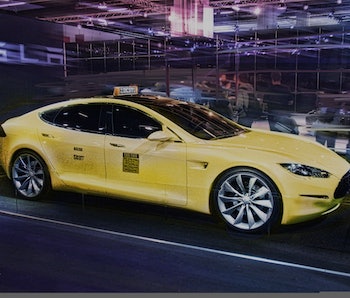 Tasha Keeney from Ark Invest recently evaluated the players who would likely benefit from this massive market opportunity. Keeney writes, “Autonomous vehicles will transform personal mobility… reap[ing] the benefits of a new market which promises to ramp from essentially $0 now to $10 trillion in global gross annual revenues by 2030.”

Keeney breaks this opportunity down into four segments. She notes, “We expect four types of firms to get a cut of the estimated $0.35 in revenue per mile that autonomous taxis will charge… Some companies probably will benefit from more than one source of revenues.” One of those companies that overlaps in a number of different segments is Tesla.

Keeney writes, “Five percent of autonomous taxi revenues, or roughly $0.02 per mile, should go to companies that generate leads and/or acquire traffic, because they have either a captive audience or a platform for attracting customers.” Tesla isn’t (currently) part of this segment — instead Keeney lists AI voice assistants owned by Amazon, Baidu, Tencent, Alibaba, Alphabet, and Apple. She also cites mapping applications owned by Baidu, Alphabet, and Apple. In addition, we find the usual suspects: Uber, Lyft, and Didi.

As opposed to component makers, Keeney sees vehicle manufacturers coming out on top here as they can earn (base case) roughly $0.01 per mile on average, upfront, on their hardware sales. Best case — they can earn a cut of recurring revenue streams as taxi utilization grows. She believes, “Individual vehicle manufacturers could benefit disproportionately, however, if they win the battle for leadership in autonomous vehicles and consolidate the market, as we expect will be the case.”

In this cross-section of auto, auto parts, and component makers, who could be the likely winners? She lists Tesla, BYD, Fiat Chrysler, GM, Magna, Nissan, NVIDIA, Panasonic, and Toyota.

A bigger opportunity than the first two, “Mobility-as-a-Service (MaaS) platforms [could] earn $.07-$.10 per mile, similar to or higher than the 20 percent that Uber and Lyft charge today… [while] share of revenues that MaaS platforms reap will depend on how much control they retain, not only over both the autonomous driving sensors and software but also over the data that the sensors gather on road conditions, obstacles, traffic, and near-misses. The data should prove crucial to improving and validating the software.”

Leadership in aggregating data points to Tesla, but, Keeney also cites other players here that should benefit including Alphabet/Waymo, Aptiv, Baidu, GM, Nissan, and Toyota.

In this segment, Keeney forecasts the biggest opportunity — “the lion’s share of revenues per mile.” Although she cites fleet owners of various types (i.e. AutoNation, Avis, municipalities, and taxi consortia), she notes that, “Tesla plans on operating its own version of an Uber-like network called the Tesla Network and is the only auto manufacturer to date to sell cars equipped with the hardware necessary to become fully autonomous vehicles.”

Tesla has significant overlap in multiple segments outlined above — especially those that offer a larger piece of the revenue opportunity for autonomous taxis. Of course, many other industry players will also prevail. But if the Tesla Network proceeds as planned, the company stands a good chance of reaping rewards as autonomous taxis come to prominence in the next decade.

More like this
Gear
November 28, 2022
Tesla Semi just hit a huge milestone that proves it's ready to hit the road
By James Pero
Innovation
November 16, 2022
Your next phone could be made of mushrooms
By Joanna Thompson
Innovation
November 24, 2022
Human-free farms could solve a major food problem
By Molly Glick
Share: