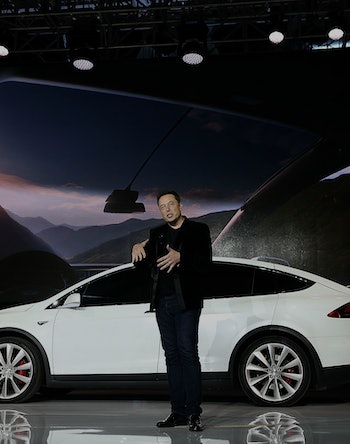 London’s bulbous, efficient, and uniform black cabs are as iconic as New York’s brightly cosmopolitan yellow ones — but if Elon Musk has his way, the institution of public taxis and their working-class drivers could become nothing more than a quaint memory.

Instead of flagging down a human driver from the side of the road, Musk wants self-driving cars, like his revolutionary Tesla vehicles, to become part of a massive, robotic fleet of hyper-smart cars willing to take a fare along without a cabbie at the wheel. Tesla owners could put their car to work when it’s not in use, earning back a portion of the vehicles fares. Musk estimates that cars are only in use 10 percent of the day, leaving them a massive chunk of time to earn their keep. With that kind of return, he says “almost anyone could own a Tesla.” It’s all part of Musk’s second master plan for the electric vehicle powerhouse, which will transform the entire relationship between car owners, cab drivers, and cars. It’s nothing if not ambitious. But in London, that ambition could destroy a 150-year-old transit institution that provides a respected way of life for thousands of citizens.

Black cab drivers in London pride themselves on “the knowledge” of their city, where the rise of ride-sharing apps like Uber has made the streets a flashpoint for old versus new. Sofian Zemmour, a 43-year-old from Kensal Rise and black cab driver for seven years, says Uber is nothing but a poorly-regulated imitation of traditional cabs. “The problem with Uber, it’s a slavery. The drivers work 14, 15 hours a day,” he says.

Beyond worker regulations, black cab proponents argue that the rigorous test drivers have to take before driving prepares them better than Uber, which has no test besides a commercial driver’s license. Since 1865, drivers must memorize a six-mile radius of London streets and landmarks. A University College London study found that “the knowledge” increased drivers’ hippocampus, an area of the brain used by animals for navigation.

Black cab supporters and drivers argue that “the knowledge” is better than GPS, as it allows for human reasoning. A passenger can get into a car, ask for “the walkie-talkie building,” and a driver can take them to 20 Fenchurch, the building’s proper name. While an extraordinarily knowledgeable Uber driver may be able to replicate that feat, an autonomous car in one of Musk’s Tesla fleets would be hard pressed to match a cabbie’s level of savvy.

Musk has a grand vision of the future, and if Uber has shown anything, it’s that he’ll have an uphill struggle on his hands if he tries to disrupt an old industry. But Musk’s plan seems to go far further, disrupting what it means to own a car. Buried in Tesla’s fine print, readers found something more concerning:

Please note also that using a self-driving Tesla for car sharing and ride-hailing for friends and family is fine, but doing so for revenue purposes will only be permissible on the Tesla Network, details of which will be released next year.

This led to a flurry of concern from tech bloggers, who saw Tesla as pushing forward a very different idea of the car of the future. Car analogies are a bit of a cliché in computing. One classic argument against digital restrictions compares limited software to a car that can only drive on certain roads. Tesla’s idea seems like that car analogy come to life — you own the vehicle, but what you do with it is still regulated by the people you bought it from.

Naturally, the free software movement — a group of programmers who are committed to keeping digital rights in users’ hands — isn’t too pleased about this. The free software movement focuses on spreading software that anyone can use, modify and redistribute — in their ideal world, Tesla drivers could remove restrictions and use their car with any ride-sharing service they wanted.

“We believe that the owner of a self-driving car deserves full control over their vehicle within the confines of the law,” Zak Rogoff, campaign manager at the Free Software Foundation, tells Inverse. “The only way to guarantee this is for the developer who writes the car’s software to release it under a free license.”

But it’s not clear that Tesla will play the game like that. Kit Walsh, an attorney at the Electronic Frontier Foundation (EFF), tells Inverse that instead of code-based restrictions, the company could ban competitors through the car’s terms of use. Courts have tended to side with the manufacturer in terms of use disputes, but the EFF argues that these agreements can threaten basic rights like free speech, and barely anyone reads the terms and conditions anyway.

If Tesla does go for a code-based restriction, the EFF has good news. “We fought for and won a temporary exemption for automobiles, so that people can currently inspect and modify much of the code in their own cars for the next two years,” Walsh says. “If Tesla tried to impose a code-based restriction on people’s freedom to use their cars as they saw fit, the public could analyze and develop a patch for Tesla’s software to remove the restriction.”

That’s only for the next two years, though, after which section 1201 of the Digital Millennium Copyright Act will prohibit consumers from viewing or modifying their device’s code.

It’s not clear what will happen after that point. In fact, many things aren’t clear about how Musk’s reinvention of personal transport will play out. Will cab drivers accept getting sidelined in favor of robots? Will drivers accept possibly losing full control of their car? And how will passengers feel about getting picked up by a robot?

“I had a lady this morning, she was in tears and she wanted to talk to somebody, she had a problem. Big issue with her husband, she feels trapped, she’s from New York and she doesn’t like it in London,” Zemmour says. “I had a journey with her and I was talking to her. That driverless guy, what, she’s gonna punch the windows and nobody’s gonna talk to her. Sometimes you need to talk to someone!”